Skip to content
The work “Traditional Legacy” has been reproduced on the label of a fine selection of Costasera 2000
The painting “Traditional Legacy” by Canadian artist Susan A. Point, and inspired by Masi’s iconic Costasera Amarone wine, was unveiled on 30 April in Vancouver, at the Wildebeest Restaurant. The initiative is part of the “Costasera Contemporary Art” project (www.masi.it/contemporaryart/en) which began in 2013 for the purposes of patronage, seeing the involvement of the most prestigious names in international art to create an original work dedicated to Masi’s flagship Amarone, then reproduced on the label of a fine selection of the Valpolicella red. For the new edition, the vintage is 2000.
The project, which combines wine and culture in the finest Masi tradition and involves those countries in which the historic wine-growers are particularly appreciated, sees Canada playing a key role thanks to the support of Masi’s importer Authentic Wine & Spirits Merchants. The artist selected is Susan A. Point, the inspiration behind and main representative of the art is the artistic movement inspired by the history, traditions and symbols of the Coast Salish people who have lived for more than ten thousand years on the west coast of Canada: Coast Salish Art. 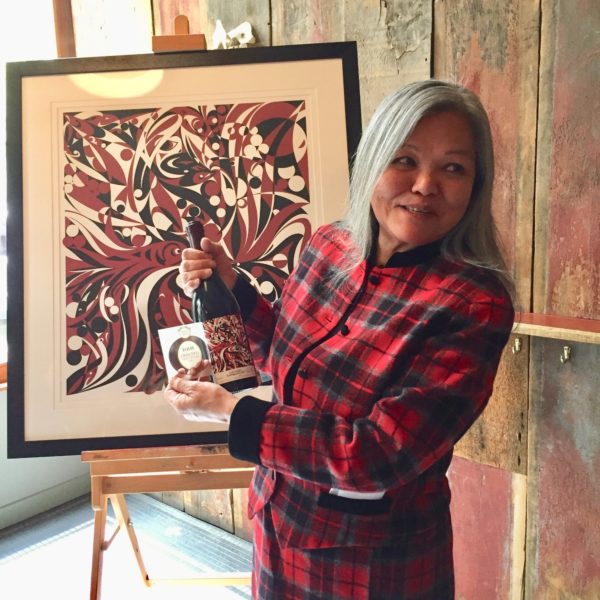 “In the work,” explained Susan A. Point, “I incorporated different motifs with the aim of melding cultures and representing not only the First Nations people in this area of Canada but the people in Italy as well. The recurring motif of the circle, symbol of life, evokes the sun, the moon and salmon eggs as well as grapes, in a conceptual link leading me in my life’s journey also to Valpolicella and to discover the products of its land.” The work “Traditional Legacy” was born from a proliferation of signs between abstract and figurative.
Raffaele Boscaini, seventh generation and Marketing Director at Masi, commented: “We’re proud to renew Masi’s commitment towards culture and contemporary art. Celebrating “Costasera Contemporary Art” in Canada this year takes on a special value for us: this is a country that has welcomed and appreciated the historic, cultural and wine-growing values of Masi and the land of the Triveneto for decades.”

The proceeds from the sale of the bottles of Costasera Amarone 2000 will again fund a scholarship this year, allowing a young Canadian artist to learn the art of glass at the renowned Berengo studio on the Venetian island of Murano.
The first edition of Costasera Contemporary Art was presented in 2013 in Stockholm, with the painting “Natura e Cultura” (Nature and Culture) by one of the most esteemed contemporary Swedish artists, Ernst Billgren, then reproduced on the labels of a selection of bottles of the 1998 vintage Costasera.
Swiss artist Maya von Moos was chosen for the second edition, with her innovative expression of art, 3D animation, and the work “La Metamorfosi della Materia” (Metamorphosis of Matter) adapted to adorn the bottles of the 1999 vintage Costasera. The new edition is now awaited by collectors who, having acquired the two previous limited editions, wish to complete the first part of the collection, for which a case has been created to house the three bottles.
www.masi.it/contemporaryart/en
***
Masi Amarone and the Canadian market
Masi was the pioneer of Amarone in the Canadian market, obtaining its first listing in the government monopoly thirty years ago. Today Masi means Amarone in Canada, exporting a large part of the prized wine production to the market. The entire range of the 5 Amaroni (Costasera, Riserva Costasera, and the three Vaio Armaron Serego Alighieri, Campolongo di Torbe and Mazzano crus) is present nationally in the most prestigious restaurants and stores regulated by the monopolies.
***
Masi Agricola: Masi is a leading producer of Amarone and has always interpreted the values of the Triveneto with passion. Its history begins at the end of the eighteenth century, when the Boscaini family acquired fine vineyards in a small valley called “Vaio dei Masi”, in the heart of the Valpolicella Classica. Over forty years ago they started an ambitious project to exploit historic wine estates, collaborating with the Counts Serego Alighieri, descendants of the poet Dante Alighieri, owners of the estate that in Valpolicella can boast the longest history and tradition, and with the Counts Bossi Fedrigotti, a prestigious brand from Trentino with vineyards in Rovereto, and with Canevel, producers of excellent Spumante in Valdobbiadene. Masi also owns the Poderi del Bello Ovile organic vineyards in Tuscany and Masi Tupungato in Argentina.
Masi has recognised expertise in the appassimento technique, practised from ancient Roman times, to concentrate colours, sugars and tannins in wines, and is among the historic interpreters of Amarone: its president Sandro Boscaini represents the sixth generation of the family that helped to create Italian excellence in this wine. Today Masi produces five different Amaroni, offering the widest range and highest quality to the international market.
Susan A. Point: Susan Point is a descendant of the Musqueam, a Coast Salish people in Canada; she is the daughter of Edna Grant-Point and Anthony Point. Susan has inherited the beliefs of her culture and ancestral traditions from her mother Edna, who received them from her own mother, Mary Charlie-Grant. Susan’s distinctive style inspired the Coast Salish Art movement. Her creativity, which draws inspiration from the stories of her ancestors and shapes the use of non-traditional techniques and materials, has inspired an entire generation of artists. Susan is an Officer of the Order of Canada and received the Queen Elizabeth II Diamond Jubilee Medal for her contribution to Canada. She has received many accolades and been named one of the 100 most influential women in British Columbia, as well as being declared one of Vancouver’s Influential Women in 2012.