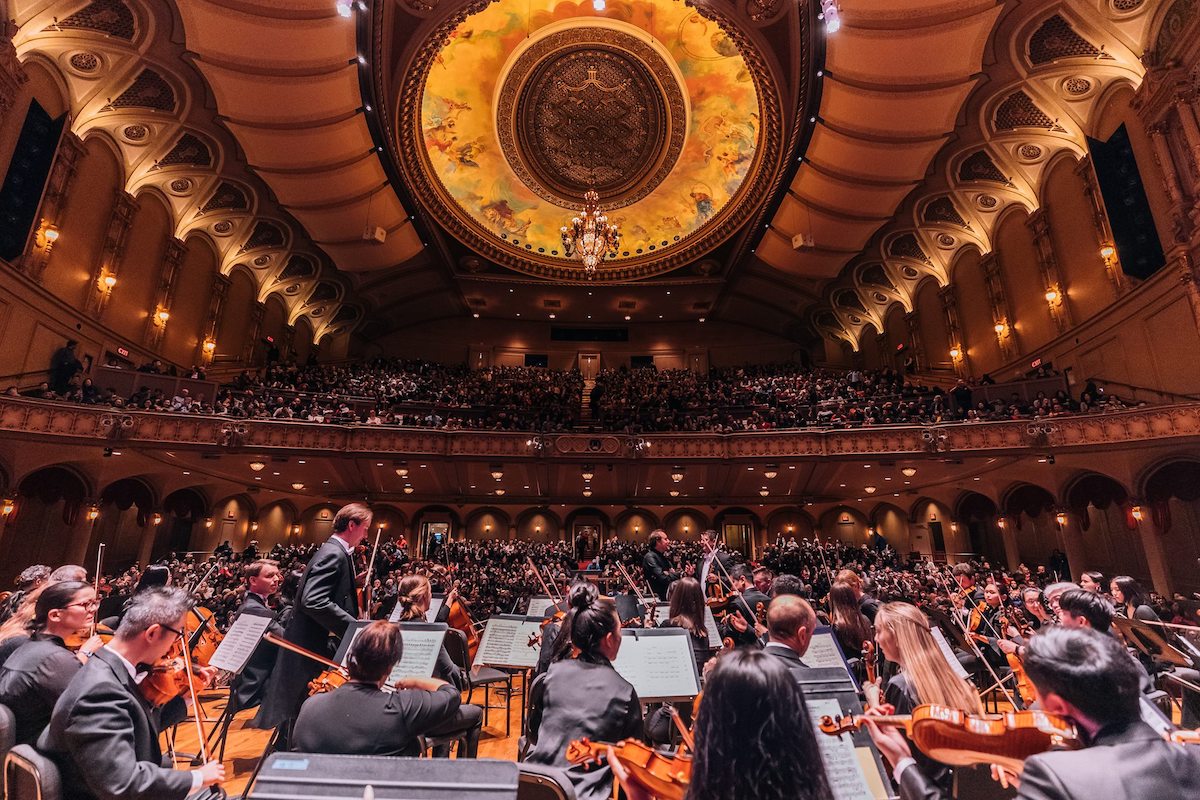 Vancouver Symphony Orchestra (VSO) Music Director Otto Tausk and VSO President Kelly Tweeddale announced today the VSO’s 2019-2020 Season, the 101st for the orchestra. The ambitious season celebrates musical innovators such as Beethoven, Mahler, and the Beatles while continuing to look to the future with the VSO Digital Concert Hall featuring hologram projects and multi-media concerts. The season features the most sought-after talent in the classical music world (including Anne-Sophie Mutter, Daniil Trifonov, and Gidon Kremer), a commitment to celebrating Canadian artists and creativity, and a fresh discovery of new interpretations and musical explorations.

“After an exciting first season as Music Director of the VSO, I am very much looking forward to my second. Working closely with the entire artistic team, we have put together a versatile season highlighting some of the great living Canadian composers and world-class soloists. I am also thrilled to introduce some new artists we believe to be very special. Strong musical personalities sharing with us their specific repertoire like Ton Koopman leading a Bach program and the Berlin Philharmonic’s principal oboist Albrecht Mayer playing and leading Haydn.

We open the season with Mahler 1, the Titan. Mahler always had a strong and close connection to my home town Amsterdam and its orchestra, and I hope to bring some of that inspiration to Vancouver. It is a season full of great music ending with what I believe to be one of the most brilliant and touching scores in music history, the last act of Mozart’s Nozze di Figaro.”

“The VSO’s 101st season reflects a great connection to both our symphonic roots and our community, but also to the world-wide celebration of Beethoven, a maverick of his time.  What I love about the season is how it combines tradition with technology and reflects Vancouver and its orchestra as a place that welcomes new ideas while attracting the most sought-after musicians to perform with us.”

Maestro Tausk opens the season on September 20th, 2019 with Mahler’s 1st Symphony “Titan”, described as the symphony that “changed the genre forever” (The Guardian) in the Goldcorp Masterworks Gold Series, and Canadian Soprano Adrianne Pieczonka will sing orchestral settings of Schubert lieder.

Russian pianist, Daniil Trifonov, considered “the most astounding pianist of our age” (The Times of London), makes his VSO debut to open the Masterworks Diamond series with Maestro Tausk, performing Rachmaninoff’s Piano Concerto No. 3.

In Spring 2020, BeethovenFest pays tribute to Ludwig van Beethoven for the 250thAnniversary of his birth. A festival highlight includes the recreation of “the most remarkable night” of Beethoven’s career, which took place on December 22, 1808 when he premiered his 5th and 6th Symphonies, the 4th Piano Concerto and his Choral Fantasy.

For more than 40 years, German violin virtuoso Anne-Sophie Mutter has been a fixture in all the world’s major concert halls, making her mark on the classical music scene as a soloist, mentor and visionary. She closes the 2019-2020 season with Beethoven’s Violin Concerto and Romances Nos. 1 & 2 with Maestro Tausk on June 9, 2020.

The 101st season sets its tone with an exploration of Asian cinematic scores. World-renowned composer and conductor Tan Dun leads Crouching Tiger & Beyond, a program of three concertos drawn from Tan Dun’s film scores that mesh the ancient tradition of Chinese martial arts philosophy and visual arts with eastern and western music. Composer, pianist and conductor Joe Hisaishi celebrates his long and fruitful collaboration with the master of animated cinema, Hayao Miyazaki, of Studio Ghibli fame (Spirited Away, Princess Mononoke).

The 7th Annual New Music Festival (VSONMF) embraces exploration with the theme of (re)creation. Maestro Tausk opens VSONMF with a concert of concerti performed by the artists who commissioned them. VSO Music Director Emeritus Bramwell Tovey closes the festival with the music of Max Richter and Thomas  Adès .

The wonder of discovery continues at the VSO as Maria Callas, one of most influential opera singers of the 20th century makes her virtual return to the stage after 40 years, with Callas in Concert – The Hologram Tour. VSO at the Annex – Carte Blanche explores the musical worlds of award-winning Canadian composers, Nicole Lizée, Samy Moussa and Marcus Goddard as they guest curate the series.

A special program in BeethovenFest – The Beethoven Experience: In the Heart of the Symphony – invites audiences to listen in a new way. Renowned percussionist Dame Evelyn Glennie, profoundly deaf since the age of twelve, presents a rare talk and performance on different ways of hearing. Maestro Tausk then invites the public to hear from inside the symphony as the orchestra is spread out and the audience seated within it for a performance of Beethoven’s 5th Symphony.

The 2019-2020 season is filled with both new and established Canadian artists and repertoire. Soprano Adrianne Pieczonka, described as “simply magnificent, with a warm and radiant voice that melts in its lower register and cuts higher up” (The Independent), sings orchestral settings of Schubert songs in the season opener. Vancouver-born cellist Gary Hoffman, son of former VSO Music Director Irwin Hoffman, returns to play Elgar’s Cello Concerto. Music Director Emeritus Bramwell Tovey returns with pianist Angela Cheng, described by the Vancouver Sun as having “a particularly powerful sound, but one so focused that it always seems transparent and sparkling”, to perform Chopin in May.

Several important Canadian artists appear in the London Drugs VSO Pops series and Special concerts. Singer, songwriter and opera composer Rufus Wainwright performs with the orchestra on November 6th to sing a set of his original music. In January, Juno-winning Chilliwack native Bria Skonberg, described as “one of the most versatile and imposing musicians of her generation” (The Wall Street Journal), joins the orchestra to perform on trumpet and vocals, covering music from Billie Holiday to Bob Dylan. Barenaked Ladies co-founder Steven Page with friends Craig Northey and Kevin Fox close the Pops series with a concert featuring songs from across Page’s 30-year career including some BNL favourites. Juno-winning singer-songwriter Holly Cole performs A Holly Cole Christmas in December with the VSO.

Emphasizing the influence of women in the symphony, the VSO continues to build on Women’s Voices, an initiative marking the VSO’s commitment to gender parity that celebrates music composed, performed and/or inspired by women. The 2019-2020 season includes the VSO debut of rising young conductor Elim Chan, 13-year-old piano prodigy, Alma Deutscher, plus some of the great performers of our time including Susan Graham, Dawn Upshaw, and Anne-Sophie Mutter. The VSO’s 2019-2020 season continues the VSO’s commitment to gender parity when inviting guest artists to perform with the Orchestra.

The 2019-2020 Season will continue to offer many different concert series: Goldcorp Masterworks Gold and Masterworks Diamond are both 6-concert classical series performed at the Orpheum. The Musically Speaking series presents five concerts in a more informal setting that connect audiences to the music with video screens and engaging dialogue from the conductor. For those who prefer an intimate experience with chamber music VSO Chamber Players continues as a four-concert series in the acoustically superb Pyatt Hall. The VSO will also continue to reach beyond downtown Vancouver in the Orpheum with Classical Traditions at the Chan Centre for the Performing Arts at UBC, North Shore Classics at Centennial Theatre in North Vancouver, and the five-concert Surrey Nights series at the Bell Performing Arts Centre, endowed by a generous gift from Werner and Helga Höing .

Along with a great line-up of classical and contemporary guest artists and repertoire, the VSO’s 101st season will also feature matinees, pops concerts, and family-friendly concerts in the following series:

Tea & Trumpets is a 6-concert series, featuring a tour of the great musical capitals of the world, accompanied by entertaining stories, narrated by Vancouver’s very own Bard, host Christopher Gaze, alongside the new VSO Assistant Conductor, Andrew Crust. Sponsored by Parc Retirement Living.

OriginO Kids’ Concerts offers a family-friendly experience with five concerts, all taking place on Sundays at 2PM. Highlights include Kseniya Simonova, an imaginative artist and animator who tells stories in sand, with videos of her work going viral worldwide, and the popular Lemony Snicket – The Composer is Dead. Families are encouraged to arrive early, before the concert for their children to touch and play with orchestral instruments at the Instrument Fair “Petting Zoo”, generously supported by Tom Lee Music.

VSO at the Movies evolve into the VSO Digital Concert Hall presented by TELUS this season as the programming adds holograms to the popular film selections. The 2019-2020 season features Harry Potter and the Half-Blood Prince, Star Wars: The Empire Strikes Back, the tragic love tale of Bogart and Bergman in Casablanca, concerto versions of Tan Dun’s iconic film soundtracks in Crouching Tiger & Beyond and finally, the Canadian premiere of Callas in Concert – The Hologram Tour, which brings the legendary Maria Callas to the stage via hologram as she performs to the accompaniment by the full VSO.

VSO Afterwork, presented by John Fluevog Shoes, is a new short-format early-evening concert series on Thursdays that invites audiences to stay downtown afterwork and enjoy some music. The series features a 5:30pm happy hour in the Orpheum Lobby, 6:30pm concert with introductions from the stage by the conductor, and a chance to meet the musicians after the concert.

Christmas and holiday traditions continue with the VSO’s A Traditional Christmas performed across the lower mainland from December 10-14. Due to restoration work at St. Andrew’s-Wesley United Chruch, downtown performances of A Traditional Christmas will move to a matinee and evening performance at the Orpheum on Saturday, December 22nd. Early music specialist and Vivaldi authority Federico Maria Sardelli leads the VSO’s annual presentation of Vivaldi’s Four Seasons at the Chan Centre for the Performing Arts.

The VSO performs to an annual audience of over 250,000 people and features more than 50 celebrated guest artists each season. Over 170 concerts are performed annually by the VSO in the historic Orpheum Theatre and numerous additional venues throughout the Lower Mainland. The VSO celebrates its 100th anniversary in the 2018-2019 season.