We are excited to offer two regional variations of a traditional French cake, the Galette des Rois (King Cake) and the Brioche des Rois to celebrate the new year with friends and family. The fèves (charm) and paper crowns are made in France. 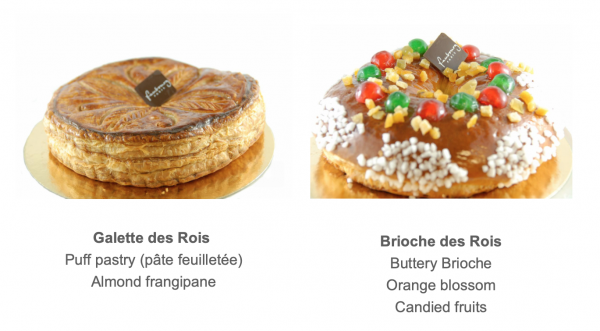 8″ size serving 8-10 people – $26.25
Each Galette and Brioche des Rois has a hidden fève (charm) inside, and are provided with a crown to reward the Queen or the King.
Products of the Month 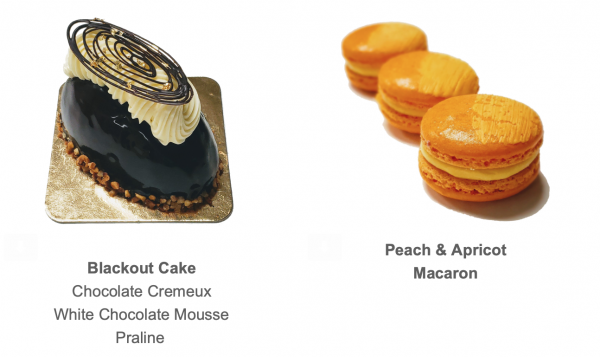 Learn more about the King Cake
A very French tradition
The Galette des Rois, or King Cake, is shared at Epiphany on January 6th – the 12thday of Christmas. Celebrating the visit of the Three Wise Men in Bethlehem to baby Jesus, the Galette des Rois have been served up since the 14th Century.

A fève (lucky charm) is hidden in the cake. The lucky one who gets it in their slice is crowned king or queen and wears the golden paper crown. Nowadays, the Galette des Rois are eaten throughout the month of January to celebrate the new year.
Galette vs Brioche in France
While the traditional Galette des Rois is eaten in each region in France, the South of France is fond of the Brioche des Rois. Pastry and bakery Chefs from the South of France want to use ingredients that are produced locally, like orange blossom and candied fruits.
Also, to create the pâte feuilletée, butter must be hard. In the South the weather is warmer, that is why they produce a brioche (bun). The ring shape of the Brioche des Rois is influenced by Spanish and Portuguese desserts that are very similar.
Bolor Rei in Portugal
This cake also has a ring shape representing the crown of kings. Candied fruits and raisins are present inside and outside the Bolor Rei. A fève is also hidden in the cake. 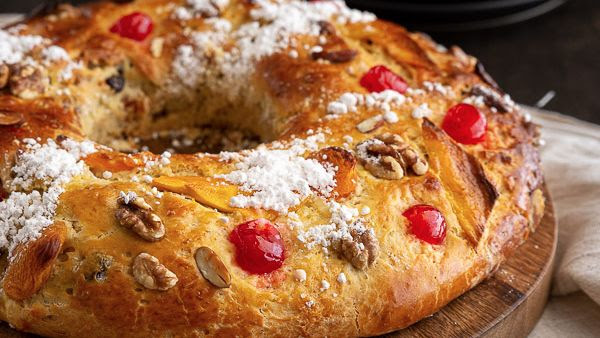 Roscón de Reyes in Spain
The Spanish King Cake is similar to the Portuguese one – a ring-shaped bun with candied fruits and a hidden fève. Sometimes there is a filling of cream or chocolate. 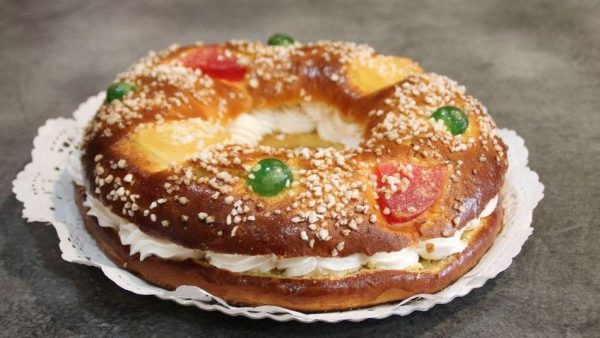 Fun Fact
Each year a French baker is selected to create an enormous Galette des Rois, 1,2m (3.94 ft) diameter for the French President. However, this huge Galette doesn’t have a fève since “it wouldn’t be appropriate to crown a king in the presidential palace.”
Planning to escape to Paris this January?
It’s a great time to escape to Paris and start off the New Year right!
European Pastry Cup 2020 – January 12 & 13, 2020

For the first time, the European Pastry Cup will be held in Paris. The 8 best teams across Europe will be competing to win their tickets for the World Finals in 2021 in Lyon, France.

Harness Racing World Championship, Grand Prix d’Amérique – January 26, 2020
The race was created in 1920 and is the most important trotting race. It takes place at the historic racing track in Vincennes, on the East side of Paris and gathers 40,000 spectators.
Paris Fashion Week – January 15 to 24, 2020
Each year, the biggest names in fashion are gathered in Paris to discover the new trends for men (January 15 to 20) and haute couture (January 21 to 24).
International Automobile Festival – January 29 to February 2, 2020

Do you like cakes but also cars? This annual event might be for you. This is one of the biggest exhibitions for concept and exceptional cars.

Information and images provided by Faubourg.
Something is wrong.
Instagram token error.
1