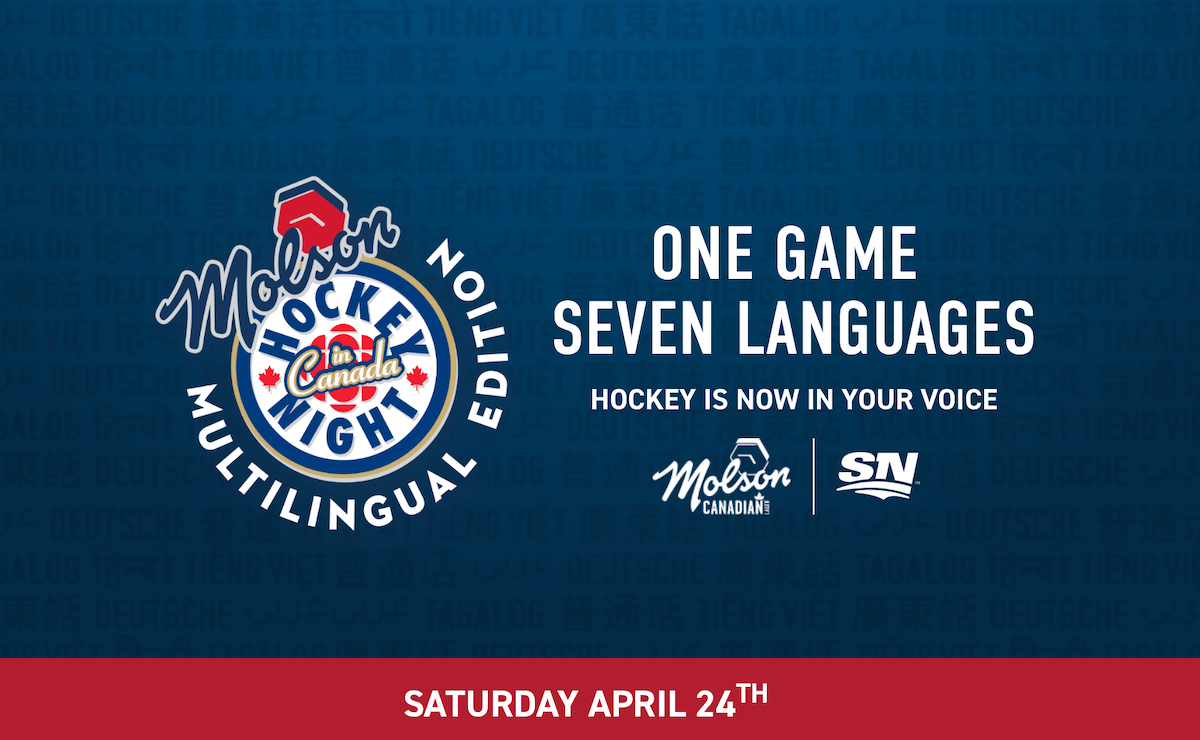 Molson Canadian knows that hockey is more than a sport in Canada; it’s part of culture, tradition and identity when you think of being Canadian. For the approximately 350,000 people who are new to Canada each year, hockey can be a way to forge new connections with their communities and unite them with their new home – but, following a fast-paced sport with a lingo of its own sure can be challenging at first. That’s why for the first time in the long-storied history of our nation’s Saturday night hockey tradition, Molson Canadian in partnership with Sportsnet is presenting Hockey Night in Canada in 7 additional languages.

On April 17, 2021, Molson invites more Canadians to experience our nation’s game, which will be streamed beyond the long-running English, French and Punjabi broadcasts in some of Canada’s most commonly spoken languages: Cantonese, Mandarin, Hindi, Vietnamese, Tagalog, German, and Arabic.

“Canada is among the most multicultural nations in the world, and what an incredible thing it could be to intersect the pride we have in our country’s game with the pride we have in the diversity of its people,” said Joy Ghosh, Senior Brand Director for the Molson family of brands. “As Canada’s oldest brewery, connecting people over a beer for 235 years and being a decades-long supporter of hockey, we’re excited to make something so special happen on April 24.”

The 7 languages selected are the most commonly spoken in each Canadian city with an associated NHL team and represent the mosaic of current and prospective hockey fans coast to coast; this multilingual edition therefore extends a wide and warm welcome to Canada’s unofficial national sport so more people can see what the passion is all about.

“As a partner, Molson’s vision for continued inclusivity in hockey is the perfect match with Sportsnet’s mandate to use our media megaphone to amplify the voices of Canadians that are not always heard with equal measure,” said Anthony Attard, Vice-President, Sports and NHL Sales, Sportsnet. “This initiative is a great step in bringing hockey into the homes of more Canadians and doing so in a way that is personalized, accessible and unique.”

Helping Molson and Sportsnet bring this initiative to life is Spalk. Their unique Virtual Sportscasting Studio and worldwide Talent Marketplace will provide the required technology and experienced hockey commentators from around the globe needed to customize the viewing experience for each individual language.

“Molson Canadian encourages the notion of community and togetherness,” said Ghosh. “Just last summer, we partnered with 32 fellow Canadian-founded brewers to join our 24-case to create the Most Canadian Case ever. And now, by presenting Hockey Night in Canada like it’s never been seen before, we can connect millions more people to hockey through language. When it comes to our national sport, we believe that anyone and everyone should be able to Rep our Home.”

On April 24th, grab a Molson Canadian and enjoy the game. Canadians can head to www.sportsnet.ca/Molson to experience this special edition of Hockey Night in Canada featuring the Toronto Maple Leafs vs Winnipeg Jets game at 7pm EST/ 4pm PST followed by the Vancouver Canucks vs Ottawa Senators game at 10 pm EST / 7pm PST for a full evening of Hockey Night in Canada to enjoy in their language of choice. Fans are also encouraged to share which language they’re watching in by tagging @molsoncanadian on Instagram or @Molson_Canadian on Twitter.

You can find more details on the stream on Sportsnet.ca/Molson.

FOURTH OF JULY at Semiahmoo Resort, Golf and Spa