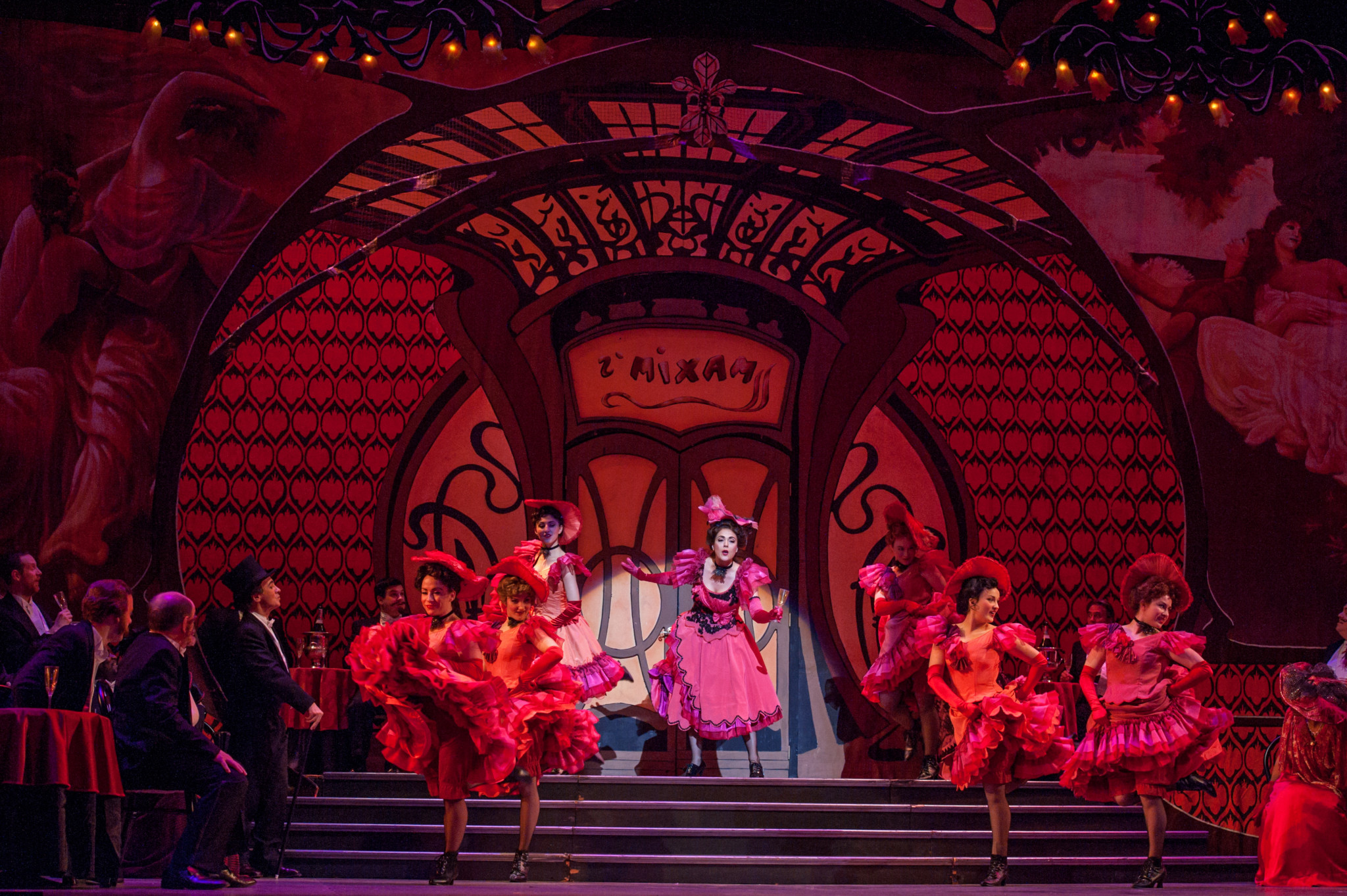 A light-hearted look at Love!

This delightful production is directed by Canadian Kelly Robinson (last at Vancouver Opera as director of the hit production of Evita). The story unfolds on a stage packed with elegant ladies, eligible bachelors, and Maxim’s famous can-can dancers. Italian-Canadian soprano Lucia Cesaroni will be making her role debut as the wealthy widow, Hanna Glawari, who schemes to win the heart of dashingly handsome Count Danilo, interpreted here by tenor John Cudia and seen recently at VO as Cassio in Verdi’s Otello.  Susan Memmott-Allred’s costumes and Michael Yeargan’s sets evoke the Belle Epoque period with winning style.

Toronto-born Italian-Canadian soprano Lucia Cesaroni, who will sing the title role of Hanna Glawari, was last seen at VO in 2011’s West Side Story. In the past year, she has also debuted with acclaim in both soprano roles of La bohème as Mimi with Pacific Opera Victoria and Musetta with l’Opera de Montreal. She has been praised by The Globe and Mail’s Robert Harris for her “beautiful, powerful voice [ably] capturing a large emotional range with great success.” She has also performed with the Royal Philharmonic, the Montreal Symphony, the Aldeburgh Festival, Spoleto Festival dei Due Mondi in Italy, and originated the role of Isis in Toronto Operetta Theatre and VOICEBOX: Opera in Concert’s world premiere of Isis and Osiris by Togni/Singer.

Tenor John Cudia interprets the role of the dashingly handsome Count Danilo. Recently at VO as Cassio in Verdi’s Otello (2017) and Juan Peron in Evita (2016), he holds the distinction of being the first and only actor to have performed both as The Phantom in Phantom of the Opera and Jean Valjean in Les Misérables on Broadway. His role debut as Curly in Lyric Opera of Chicago’s Oklahoma! (2013) earned him praise from Opera News for his “naturally appealing timbre”. He recently debuted as the Duke of Mantua in Lyric Opera of the North’s Rigoletto (2017).

Rising star conductor Ward Stare directs the Vancouver Opera Orchestra and breathes life into the lush waltzes and ballads of Franz Lehár’s charming score for The Merry Widow, which has not been performed at VO since 1990. Holding the prestige of being the youngest-ever music director of Rochester Philharmonic Orchestra since 2014, he has conducted with orchestras including the Metropolitan Orchestra in New York, the Baltimore Symphony, Sydney, Pittsburgh, Toronto, and Calgary. He has been hailed as “inspiring musicians to impressive heights” by The New York Times.

While The Merry Widow is sung in German, the dialogue will be in English.  English SURTITLES™ will be projected above the stage.

Opening night of The Merry Widow is Saturday, October 20, 2018 at 7:30pm, with subsequent evening performances on Thursday, October 25 & Saturday October 27 both at 7:30pm, and a 2:00pm matinee on Sunday October 28. All performances take place at the Queen Elizabeth Theatre (Georgia and Hamilton), Vancouver. Tickets ranging in price from $50 to $175 are available at the Vancouver Opera Ticket Centre, by telephone (604-683-0222), or online at www.vancouveropera.ca. See complete ticket information below. Season subscriptions are still on sale and single tickets are available for the whole season now.

Single tickets for this incredible production start at $50 and are available from the Vancouver Opera Ticket Centre, (located at 1945 McLean Drive, Vancouver), Monday-Thursday 9 am-5 pm, Friday 9 am-1 pm (hours subject to change in July and August), by phone at 604-683-0222 or online at www.vancouveropera.ca. Visa, MasterCard and American Express are accepted.

Details, programming and casting are subject to change.

Turandot a must see Opera for all