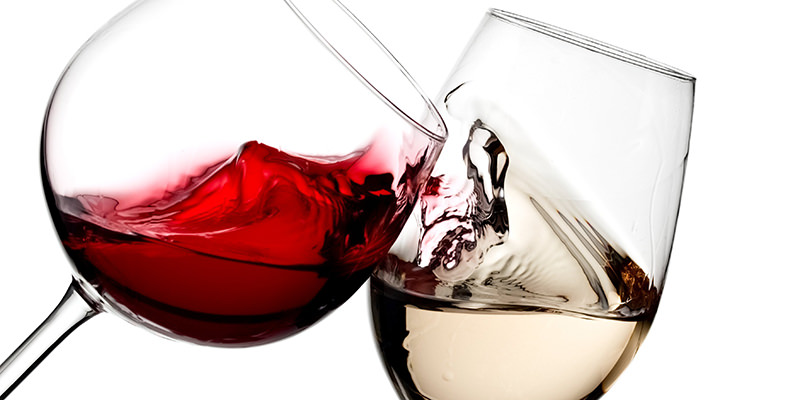 September is Cam’s month for the Tasting Ten session, however this year too many people were going to be away so he rescheduled it for a month later, one week after our regular October session. 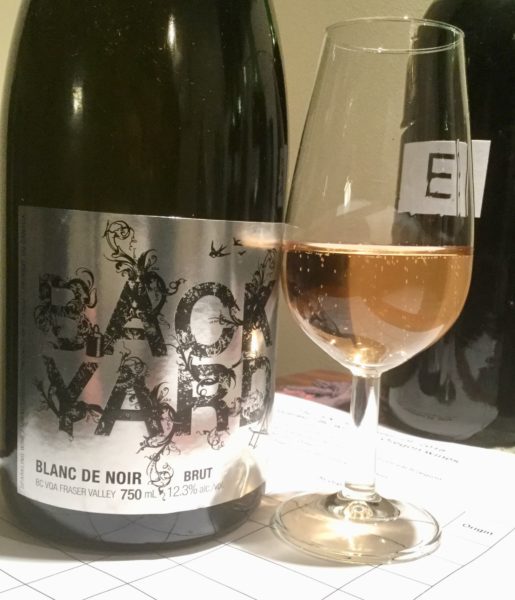 Upon arriving, we were greeted with a lovely sparkling wine, A Blanc de Noirs from Backyard Vineyards in Langley.  Most everyone found it to be very pleasant and a bargain at $17.99*.

His theme for the tasting was, ‘Contrasting BC and Oregon Wines’.  Unfortunately, due to a lack of availability at his local LDB, Cam had to substitute one Washington State wine for one of the Oregon choices.  We were presented with four white wines and four reds.  Four were from BC and four were from the US.  There were the same two white varieties and the same two red varieties from each region.  Two white wines from BC and two white varieties from Oregon.  With the reds, two were from BC and one each from Oregon and Washington. 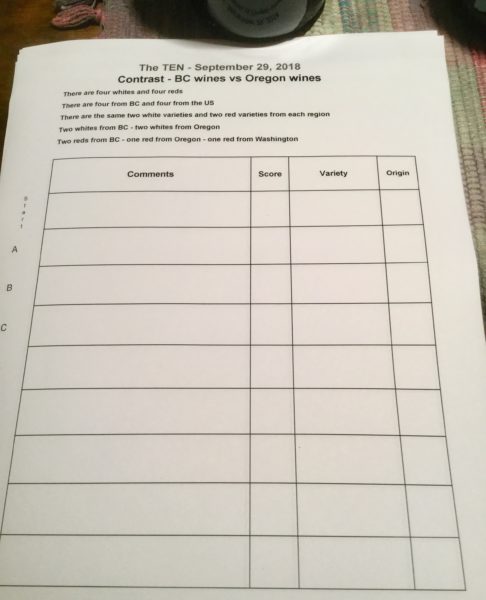 Of the four white wines, two were a little subdued and didn’t show much obvious varietal character.  Guesses for the variety included pinot blanc, unoaked chardonnay, sauvignon blanc and pinot gris.   I leaned more towards pinot blanc, given their softness.   They turned out to be pinot gris.

With the other two, there was greater certainty, with most people identifying them as chardonnay.  Wine ‘D’ was the favourite with classic varietal character.

The white wines were:

When I tasted the Cedar Creek later on, it had opened up and showed more varietal character, so be sure to give this one some time to breathe.  Everyone was delighted to find out that the best wine, ‘D’ the Quails’ Gate Chardonnay,  was from BC and that it was very affordable.

Everyone expressed surprise that the Domaine Drouhin did not show better as it is a highly respected Oregon producer and I have certainly tasted excellent wines there in the past. 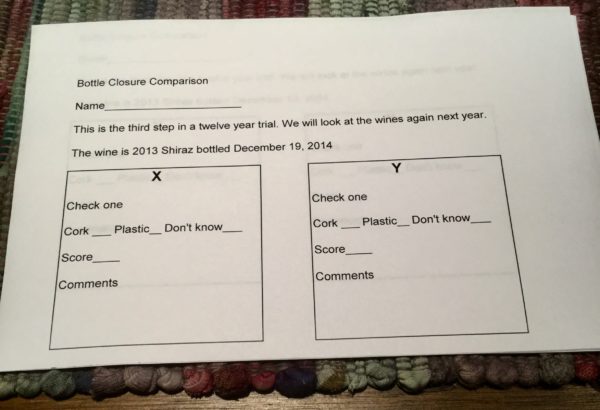 Before we started the red half of this flight Cam asked us to help him with an experiment he has been conducting for the last three years.  In 2013, he bottled one case of his handmade syrah using standard corks.   The other case, he bottled with plastic closures (plastic corks).   He poured two wines, X and Y and asked us to assess each wine and to guess which closure had been used.  Everyone found X to be bright with lots of fresh fruit on the nose and palate, while Y was more restrained, subdued and slightly softer.   Most everyone preferred X.   When all the assessment sheets were turned in, he told us which was which.   X had been sealed with the plastic cork, much to everyone’s surprise.

Then it was back to our flight.  Two of the wines were clearly pinots with one of them being noticeably lighter in colour and intensity.   Guesses for the other two wines included cabernet sauvignon and merlot.  Most people found ‘E’ to be a good pinot noir.  ‘F’ generated a little more controversy.  I felt that the almost overwhelming green bramble note dominated the other fruit and that it needed more time to age.  Good, but my least favourite of the four.  Others raved about it with many saying it was their favourite.  For me, ‘G’ was my top wine.  I loved the characteristic Burgundy nose with cherries, forest floor and meaty notes.   Others were less fond of this style of pinot noir though all found it to be good.  Our final wine also produced divided results.  For me it was the second best.  Very approachable now with everything needed to help it age well.  Plum, raspberry, cassis, cocoa and vanilla on the nose and palate with big soft tannins.  Interestingly, others found the tannins overpowering and would age it before drinking it.

The red flight consisted of:

Those of us who were impressed with ‘G’, Harper’s Trail Pinot Noir,  were delighted to see such an attractive price.

Once again, in a blind flight, BC wines proved to be top quality wines that are affordably priced.

At the end of these sessions, founding member, Wayne Meadows always brings along a ‘show and tell’ corkscrew from his amazing collection.  This time it was one that was almost 220 years old.  It looked near new and was obviously a very well-crafted implement.

As described by Wayne, “A mint, one of a kind sterling silver wing nut corkscrew hall marked for John Mewburn London 1799, lion passant with maker’s mark. All silver components are marked including the frame, cross bar, upper plate & wing nut. Obviously custom made for a wealthy client.”

Visiting the Premium Lounge at Liquidity Winery in Okanagan Falls