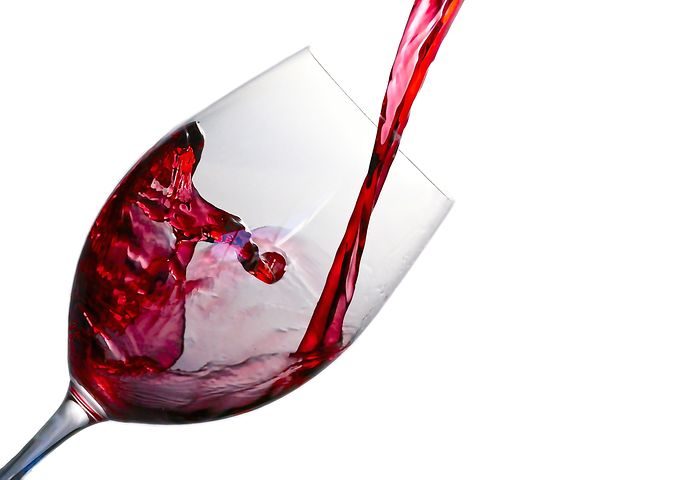 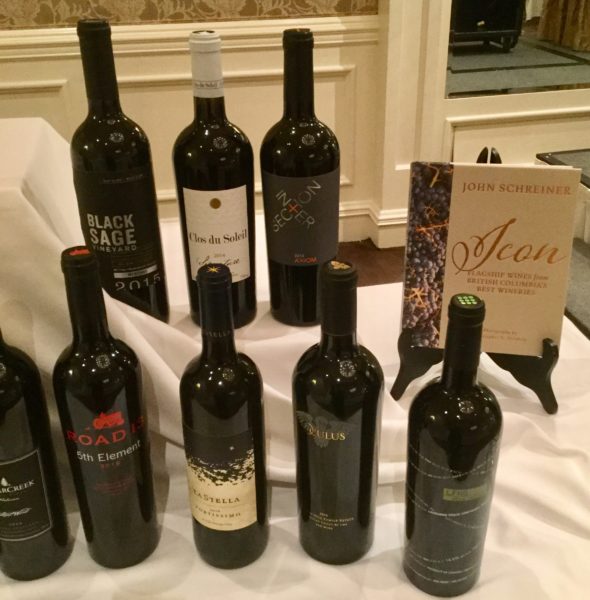 I attend many wine tasting events and there is always the hope that some wines will be impressive and most of the time there are a few that do stand out. 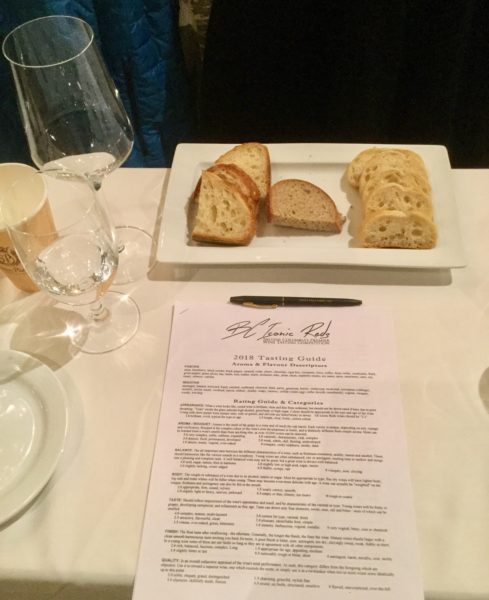 This tasting, though, was something quite different.  Twenty BC red wines and all examples of the best that BC has to offer.  An event like this isn’t so much a competition, but rather an appreciation and celebration of how far wine making in BC has come.

Ten years ago, the colourful John Levine, founder of the Playhouse International Wine Festival and Simon Wosk, owner of the former Sip Wines VQA store in Richmond, decided to host an event to showcase the best, cellar-worthy BC red wines, which tend to be Bordeaux styled blends.   Thus, was born the BC Iconic Reds Tasting Competition.  It was a huge success and now many return year-after-year to check out the latest vintages.

With the changes to the BC liquor laws in 2016, Sip’s license was sold and the store was closed.  However, because the annual event was so popular, they decided that they needed to find a new venue and allow the competition to continue.  Simon and his wife Sandi, teamed up with Norman Wood, of Sutton Place Wine Merchant and moved the function to downtown Vancouver.

This event gives BC wineries the opportunity to put their best wines in front of a large group of serious consumers.  After all, any competition is designed to attract attention to a winery’s products, thereby increasing sales.  BC Iconic Reds, eliminates the middleman and has the consumer judge which wines appeal most to them.

Attendees get to sample several wines that, due to their small production, are often limited to wine club members or are only available for sale at the winery.

While these wines have prices that are not ‘everyday’, over and over they have proven themselves to be on par with wines from Napa and Bordeaux that often sell for double to triple these prices. 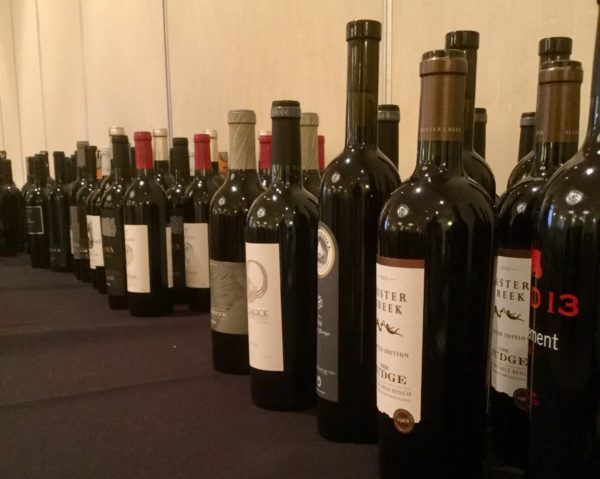 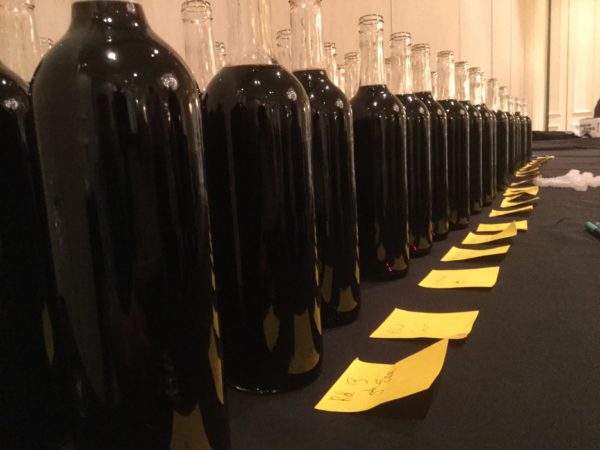 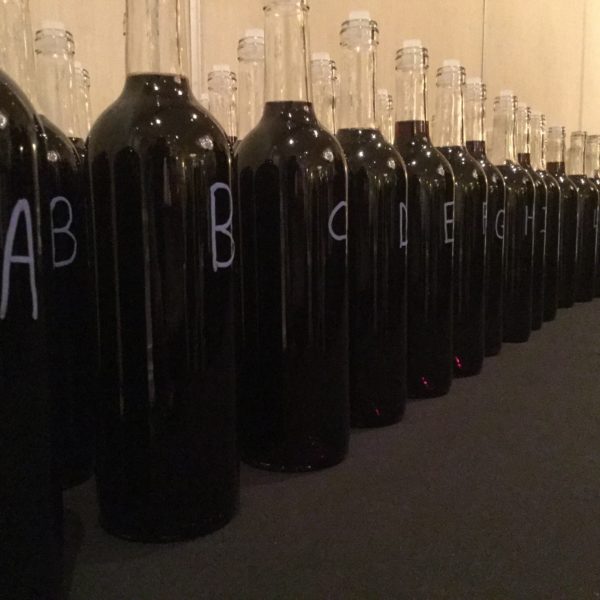 I was very impressed with the organization behind the scenes.  The wines were double decanted during the afternoon – poured from bottle to decanter and then into a clear, unlabeled bottle.  Then all the helpers left the room and Simon randomly assigned each one a letter of the alphabet.  In this case A through U.   No one knows which wines they are tasting – no labels, no vintages and no prices, until the very end after voting has taken place.  It all comes down to taste.

The wines, in alphabetical order, we tasted were:

When we had tasted through all the wines, people were given a ballot and asked to pick their top five wines. The trouble is that when wines are all this good, picking one over another is like splitting hairs.

One might ask, are these wines all the same or are they all different?  The answer is both.  There are certainly common threads running through many of them.  Certainly, you could expect to find flavours and aromas of anise, blueberry, blackberry, boysenberry, cassis, cedar, cherry, chocolate, coffee, fig, herbs, mint, pencil lead, plum, raspberry, smoke, spice, tobacco, truffle and vanilla among others.  But each wine has its own combination of these.  In addition, there were four vintages represented – 2013 thru 2016 – and the conditions from one year to another can also make a difference.

Vintage variations – 2015 being a particularly warm year, different regions, and different blends no doubt all played a part in personal preferences.  Some liked more rounded wines that were easy to approach and others like the more muscular wines that will continue to improve for years to come.

Ballots were collected and committee left the room to do the vote count while John Schreiner entertained the audience with a brief history of the BC wine industry and the rise in quality of cellar-worthy red wines, which became the subject for his latest book, Icon.  Then he took questions from the audience, including, “Which were your top five John?”

The results?  Well it all depends on who you ask.  My top five were different from John’s and both of ours did not match the consumers’ choices. 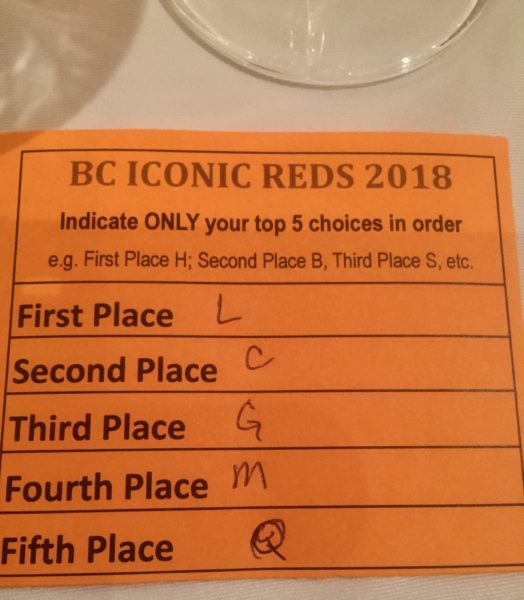 My top five were:

The consensus of the crowd?

So, what does it mean when the results are all over the place?  Simply, that no matter which one of these twenty iconic BC red wines you find and enjoy, you can’t go wrong. 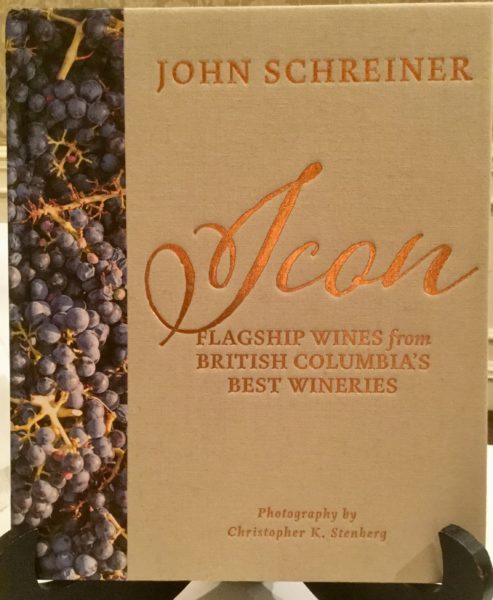 If you are a fan of big reds, I suggest getting a copy of Icon, where John lists over 100 cellar worthy wines plus another dozen or so that are ‘up-and-coming’ (and often represent very good buys) and selecting a couple of wineries to start collecting.  Then all you need is patience, lots of patience and then in eight or ten years you will have a vertical tasting from your favourite winery.

A list of my favourite wines and some new discoveries…