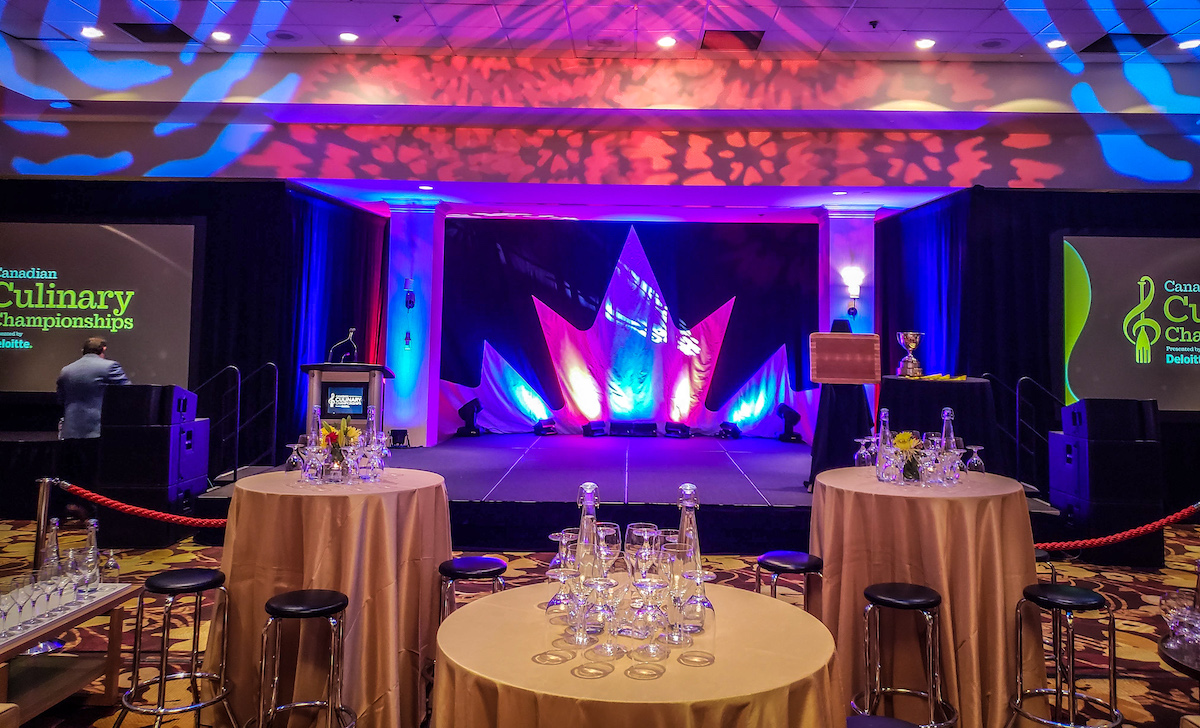 “Wow, I’m so happy what a great way to end the day,” says Chef Ito.

The Mystery Wine Competition is the first competition in the two-day, three competition culinary triathlon. The eleven competitors each won the Gold in Canada’s Great Kitchen Party qualifying competition in their respective cities; and, Thursday evening received a bottle of the unlabelled Mystery Wine. Chefs were then tasked with trying to identify what varietal the wine was and to create a dish that would pair well with the wine.  This morning Chefs went shopping in Kelowna.  The challenge was not only to present a dish that paired with the Cabernet Franc wine but to also feed the 400 guests attending the event with a budget of $500. Some of the chefs are familiar with local suppliers and shops having visited the area in the past while others had not been to Kelowna before and arrived a few days early to explore the city and meet with suppliers.

David Lawrason, national wine advisor for Canada’s Great Kitchen Party was key in choosing the Mystery Wine for this year’s competition. “When selecting a wine, we look for a wine that will challenge our competitors and bring out their creativity. The Cabernet Franc from Mission Hill Family Estate was selected and tonight we saw the diversity in the room show; chefs were creative, innovative and did a great job in pairing their dishes.”

The competition continues February 2nd when the chefs take part in the challenging Black Box competition at Okanagan College starting at 8am and then they close off the two-day competition with the Grand Finale at the Delta Grand Okanagan Resort.  On Saturday night, three chefs will be standing on the podium.

Canadian Culinary Championships – The Canadian Culinary Championships is the national finale of the Canada’s Great Kitchen Party regional events which are held annually in the fall.  The regional events have been created to elevate and celebrate three pillars of Canadian culture – sport, music and food.  The purpose: providing young Canadians the opportunity to be extraordinary in the same pillars. High performing athletes are provided the support they need to compete on the world stage. Musical instruments are purchased for schools, enabling students to discover the magic of music. And kids learn from leading Canadian chefs how to grow, cook and share healthy food addressing food security for all youth. Canada’s Great Kitchen Party and the Canadian Culinary Championships support B2ten, MusiCounts and Community Food Centres Canada.

The Music Beneficiary: Canada’s Great Kitchen Party will provide musical instruments for children in 20 schools every year. MusicCounts is keeping music alive in schools and communities across Canada by putting musical instruments into the hands of children that need them most. MusicCounts is Canada’s music education charity, affiliated with the JUNO Awards and supported by many of Canada’s top musicians. The instruments they supply last over 15 years and well over 800,000 children have known the joy of music as a result of their programs.