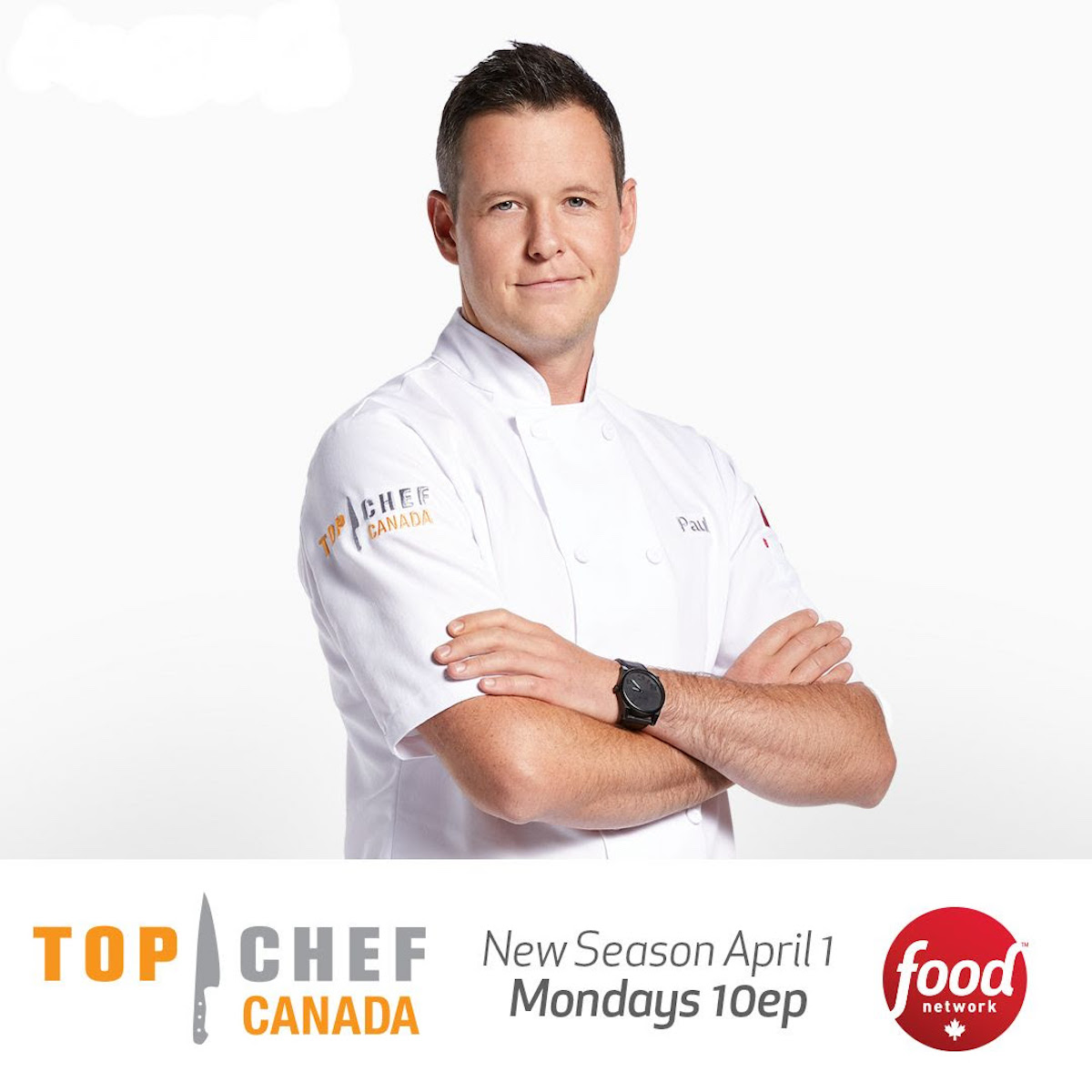 Excerpt of an interview with Chef Paul Moran from 2014 and an update of his accomplishments since. Currently Executive Chef at The Hatch and 1909 Kitchen at Tofino Resort and Marina.

I first met Chef Paul Moran the day of the inaugural Hawksworth Young Chef Scholarship competition, held in 2013 at the Pacific Institute of Culinary Arts on Granville Island in Vancouver. I continue to follow Moran’s career and I am excited to see how he does competing on Top Chef Canada starting Monday, April 1st.

That path took Moran to Vancouver where he intended to enrol in Culinary school while working part time at West Restaurant. However Chef David Hawksworth had other plans as he obviously saw potential in the young man. Chef Hawksworth explained that he would be his culinary instructor and there was no need for Moran to go to culinary school.  Moran was to work full time and learn his trade under the watchful eye of Chef Hawksworth.

Moran challenged his first and second exams, attended the compulsory school courses, and having met the amount of required apprenticeship experience, had achieved his Red Seal Certification. It was now time for Moran to take on a new experience. Still in his early 20’s Moran explored the culinary landscape of Dubai. Securing a position at Jumeirah Beach Hotel’s Marina Restaurant. Moran says the city was beautiful but he found the quality of the cuisine to be inferior to what he was used to in Vancouver so after 5 months he packed his bags and headed home.

It was an interesting journey for Moran that now includes extensive training and experience in outstanding hotels and restaurants of Europe.

Moran was anxious to explore possibilities in Europe and with working visa in hand set off to look for work in the south of France. Although he had West Restaurant on his resume he was always asked how many Michelin stars did the restaurant have, no one had heard of Vancouver’s top restaurant. Even though he had four or five years of experience his resume was basically thrown out the window and he started at the bottom. Thanks to people he met along the way it wasn’t long before he was employed in a Michelin starred restaurant and although Moran had almost no French language skills he quickly secured a position.

Moran began working at Chantecler a 2 Michelin starred restaurant in the Hotel Negresco in Nice.

Moran said of working in the Michelin starred restaurant “In the south of France I got a job in Michelin starred hotels on the Cote d’Azur and got into a routine, it was really an awesome spot to live. A really good experience to have that. The hotel was over 100 years old with copper pots and linen cloths,  there was maybe four or five people to plate a table for just the appetizer. I don’t think I’ll ever have a chance like that again.”

After his working visa ran out it was back to Canada and working in Montreal. For the next year he worked at Laurie Raphael.

Still determined to learn by experience Moran traveled back to Paris in the fall of 2010. It had always been Moran’s dream to work at L’Arpege. He was hired but even though he now had Michelin star restaurant experience he was to start over again at the bottom.

However fate intervened to postpone this opportunity. L’Arpege was closed because of a fire and Moran would have to wait at least a month to start working at the restaurant where dinner may cost up to 1,000 euros.The budget was already squeezed so Moran started to look for other work.

“During that time when I was looking for a job I eventually ended up at this spot that a friend of a friend had said this place just opened, I went, met the chef, he hired me part time.”

“The restaurant, Saturne, in the 17th arrondissement, was owned by 24 year old Chef Sven Chartier, formerly of L’Arpege and Racine, and by sommelier Ewen Lemoigne, also formerly of Racine.”

“After about two weeks he (Chartier) offered me a sous chef job there, he really wanted me to stay, talked to me about where he worked before which was where I was going to work.”

Moran was to make one of the biggest decisions of his life. Careful consideration was required. Did Moran want to start at the bottom at his dream restaurant or take a much better position working with young talent in an exciting environment?

In his own words: “One of the toughest decisions I ever had to make was go start at the bottom at this restaurant I had been dreaming about working at for the last five years or start as the sous chef at this restaurant that I now know everything about, that seems really cool but has no secure future, it could close in a month for all I know. You learn from each chef you work under so I decided to stay.”

“I definitely made the right choice. I realized that a year later when he (Chartier) took a friend and me for lunch at L’Arpege where I had planned on working originally. He treated us, he was very happy with my work and the way we had been getting along. We were super disappointed with the meal we had there. The food was at a level way below what we were preparing at where I was working as a sous chef so it was a huge relief. I definitely realized at that moment I had made the right choice”

Moran speaks very highly of his time at Saturne. The dinner tasting menu at Saturne was 50 euros, a very reasonable amount given Chef Chartier’s caliber and Michelin star training. The ingredients used were of the highest quality. The restaurant was more laid back, more with the times. The international financial crisis had changed the face of classic French dining. Moran says he had fun and feels really lucky to be part of that culinary revolution in Paris that was just taking off when he there.

“When the chef opened his restaurant he was 24 and when he hired me I was 24 so it was like two 24 year olds working in the kitchen, really driven, it was a fun experience.”

I  had previously only been to Paris for a week but now it was less classic and there were bistros, more hip new places opening up. You could go to a Michelin starred restaurant for lunch for 50 euros, not like in the south. That’s why I went to Paris because the vast number of restaurants I could work at. A chance to do something a little more casual, more hip, a little more fun.

When Moran came back from Paris totally eyes open, do anything, ready to open my own place with a partner. Thinking we could do this, plan it, meet with people and just do it. There was a thorough business plan, potential investors, finding a location, going from a to z, budgeting, menu, concept. The idea was to renovate an old barn on a farm with a menu that would include food grown on the farm. In the summer guests would eat in the garden and in winter dining in the converted barn. When that did not work out Moran thought to open a restaurant in Vancouver similar to the one he had worked at in Paris. There was a location on hold and willing investors. Unfortunately the bank felt that there was not enough capital and the plans were shelved.

Following his win at the Hawksworth Young Chef Scholarship competition in 2013 Paul Moran completed his international stage at Chef Enrique Olvera’s Restaurante, Pujol, in Mexico City ranked as the 17th best restaurant in the world according to San Pellegrino’s The World’s 50 Best Restaurants.

Later returning home and, briefly,  to a new position at Nita Lake Lodge in Whistler. But as it turned out it was soon onto Plan B.

Approached by the West Coast Fishing Lodge on Haida G’wai where there is a luxury lodge for 50 guests at a time, a 50 guest floating barge for the hard core fisherman with less emphasis on décor, simpler for people who want to fish and an outpost for up to 14 guests.

This was an opportunity cooking for the 14 guests who reserve the outpost for 4 night stays and also providing all the meals for the staff and fishing guides.

Moran: “The job was to cook for the 14 guests with only two of us in the kitchen it was right up my alley. It worked out perfectly in the kitchen the entire summer working 100 days straight with no break, napping when I could. The location is very special.”

“We did all our own prep, didn’t even have a dishwasher so we did our own dishes. This was the first time I had ever worked with fishing guides and finding out what that job is all about. It was the first time I had worked with a group of people who were working as hard as I was. In the kitchen you had to work hard everyone else was also working 15 or 16 hour days seven days a week. They were a very professional group of people to work with. It was cool to be a part of a group like that, a very diverse group of Canadians.”

Next returning to The Outpost for the 2015 season. In September of 2015 Moran stayed on and spent a month foraging and picking wild mushrooms. Building a commercial size dehydrator and then able to return home with at least a year’s supply of dried mushrooms. Paul says he was introduced to mushroom picking by his great grandmother and it is a family tradition to forage and preserve their own food.

As a chef Moran is interested in preservation and fermentation of food. The quality of food at home and in the places he’s worked is a high priority.

Chef Moran  is currently Executive Chef at The Hatch and 1909 Kitchen at the Tofino Resort and Marina.