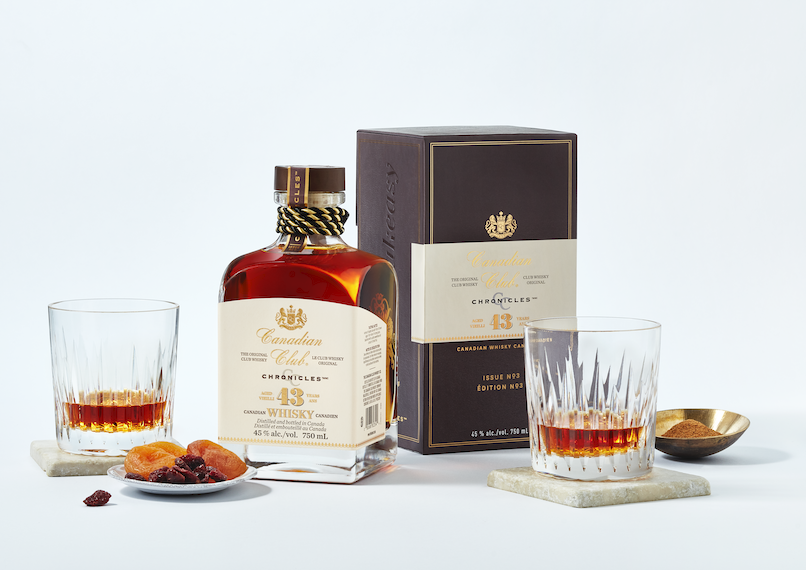 Looking for the rarest and most unique gift for that specail someone on your list? Look no further because the Canadian Club Chronicles 43 is the ultimate gift this year. A true collector’s item it’s sure to impress.

Canadian Club® is pleased to announce the release of Canadian Club 43 Year Old, Canada’s oldest aged whisky and the third edition of the Chronicles Series. Paying tribute to its legendary role during Prohibition, Canadian Club® has dubbed this limited-edition expression ‘The Speakeasy.’

Batched and barrelled in 1977, Canadian Club 43 Year Old boasts notes of oak and leather on the nose, while delivering nutmeg and dried fruit on the palate, with a lingering mouth feel. The spirit’s subtle spice and sweetness are perfectly balanced, a true testament to the distillery’s masterful craftsmanship that has be tirelessly honed for more than 160 years.

“It is just incredible,” says Canadian Club® Brand Ambassador Tish Harcus. “When I tried Canadian Club 42 Year Old, I thought we couldn’t do any better, but then I tried this – it is absolutely stunning.” 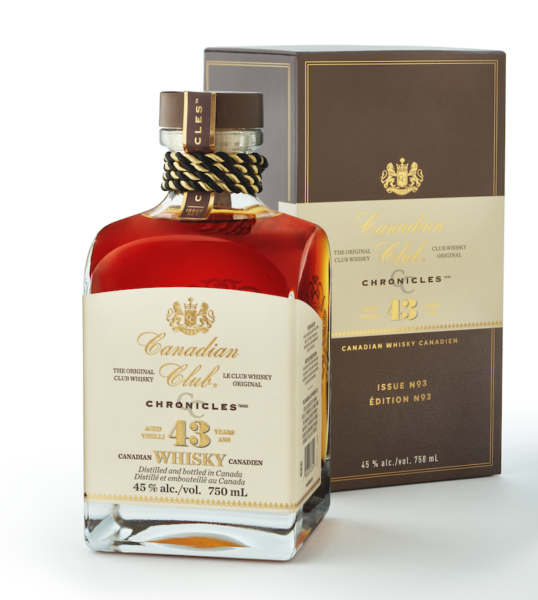 Palate: Nutmeg spiciness balanced with a subtle sweetness and a touch of dried fruit; complex but smooth and satisfying

The Canadian Club 43 Year Old boasts notes of oak and leather on the nose, while delivering nutmeg and dried fruit with its lingering mouth feel.

Canadian Club 43 Year Old hit shelves across Canada this autumn in very limited quantities. At a suggested retail price of $319.99 / 750 ml, with an ABV of 45%, this highly collectible marque will be coveted by whisky enthusiasts ahead of the holiday season. Available at select BC Liquor Stores $289.99 (before tax) with a 5 star rating.

Batched and barrelled in 1977, Canadian Club 43 Year Old boasts notes of oak and leather on the nose, while delivering nutmeg and dried fruit on the palate, with a lingering mouth feel. The spirit’s subtle spice and sweetness are perfectly balanced, a true testament to the distillery’s masterful craftsmanship that has be tirelessly honed for more than 160 years.

Harkening back to its underground roots during Prohibition, Canadian Club 43 Year Old’s moniker ‘The Speakeasy’ honours the whisky brand’s role in supplying secretive speakeasies, including one such illicit watering hole in the distillery’s own basement. During this time, a notable sea captain, Bill McCoy, demanded that only Canadian Club whisky be stocked in such clandestine bars, as he knew patrons could trust the high-quality liquid. Ever since, all things authentic came to be known as ‘the real McCoy.’

“Canadian Club® is a leader in the whisky industry, always has been,” says Senior Brand Manager Deepti Gurkar. “We were evolving the brand and building a Canadian Club® portfolio long before the rye whisky renaissance even started.  As a result, we get to offer consumers a showstopping, beautiful whisky, the Canadian Club 43 Year Old. It’s spectacular. It is the epitome of the Canadian Club® brand and its dedication to perfection.

Hiram Walker a successful grain merchant, founded what would become Canadian Club in 1858. The first distillery was established in Walkerville, Ontario because of the exceptional quality of the local grains there. In those early days, if you wanted whicky, you took your own jug or bottle to the local store and filled it from a generic barrel.

Canadian Club® whisky was different – smooth and easy to drink and the distillery wanted people to know who made it. They branded their barrels with their name on it, as a signature of confidence and assurance of quality.

Canadian Club® is an iconic brand that has propelled the Canadian whisky category to fame around the world for almost 160 years.

Canadian Club’s success and longevity can be attributed not only to the brand’s renowned history, but also to the quality of the product inside its bottles. We have always prided ourselves on making a superior whisky accessible to everyone who wished to enjoy it.
This is what has allowed our award-winning whisky to endure the test of time, throughout history and changing trends and tastes. Today, Canadian Club continues to be the choice of savvy drinkers who are looking for a classic cocktail, or simply a great tasting whisky served neat.

Beam Suntory was created in 2014 by combining the world leader in bourbon and the pioneer in Japanese whisky to form a new company with a deep heritage, passion for quality, innovative spirit and commitment to Growing for Good. Headquartered in Deerfield, Illinois, Beam Suntory is a subsidiary of Suntory Holdings Limited of Japan. For more information on Beam Suntory, its brands, and its commitment to social responsibility, please visit www.beamsuntory.com and www.drinksmart.com