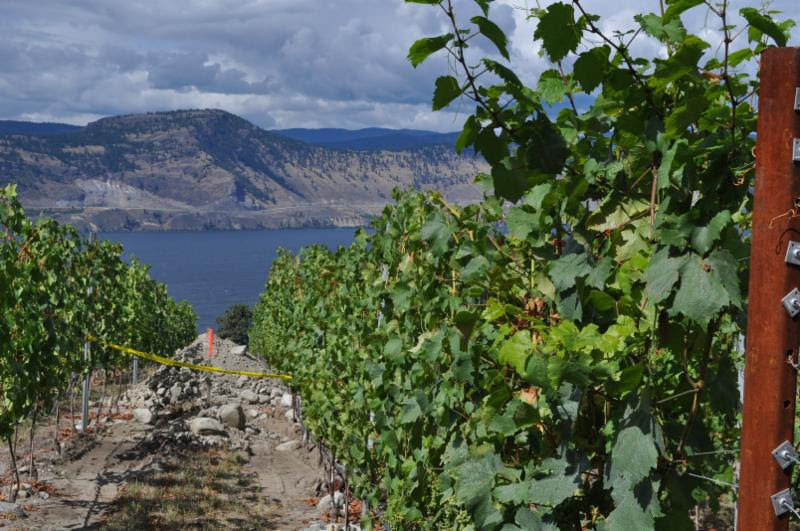 A small vineyard on the north Naramata Bench is creating buzz in the wine world, and the latest vintage is now available. Coolshanagh Vineyard is being noted for its exceptional terroir. Planted in 2004 and 2009 to select clones of Chardonnay and in 2009 and 2011 to specific clones of Pinot Noir, this site is a shining example of what this terroir can produce.

The Coolshanagh wine can be purchased at Okanagan Crush Pad or where fine wines are sold. Trade and public interested in being contacted in advance of the next release should contact the Okanagan Crush Pad order desk at 604-800-0601 or via email at orderdesk@nullokanagancrushpad.com.

“Friends of Coolshanagh” may purchase by the case directly from Coolshanagh Vineyard. To join, call Skip Stothert at 250-809-4695 or via email at coolshanagh@nullme.com.

A Celebration of Terroir

‘Terroir’ is a French term that loosely translates as ‘a sense of place.’ Practically speaking, the idea of terroir includes the complete natural environment in which a particular vine is planted, including specific features that may include soil, topography (aspect and slope), and climate.

The Coolshanagh Vineyard is located on a plot of land that had never before been cultivated. It offers a south westerly exposure on the east side of Okanagan Lake. This location allows for the reflective benefits of the lake during the hot growing season and a moderating effect during the winters. The location on the eastern side of the lake allows for increased sunlight on the vineyard until late evening, followed by cool night air drafting down from the 3000 ft. Okanagan Mountain, which rises sharply behind the vineyard. The vineyard is perfectly sloped for water and air drainage, as well as great sun exposure, which is especially important in the fall ripening season.

Coolshanagh Vineyard is planted on one of the most distinct soil structures in the Okanagan Valley. It is this unique soil that is arguably the greatest singular factor that contributes to the wine’s style and flavour. This diversity includes a more common silt and clay-type soil, which transcends into rocky boulder-laden glacial soil. That stone is filled with limestone and calcium carbonate, which feeds the vines, granting steely mineral flavours in the finished wine. Not only do these rocks feed the vines but they also offer additional heat and light reflectivity to the vines. Elements of decomposed mother rock and seams of alluvial calcareous gravel combine to allow for good drainage, critically important to allow the roots to grow deep underground in search of water.

In 2014, acclaimed Chilean terroir expert Dr. Pedro Parra visited the site and claimed that the Coolshanagh Vineyard is among the top 15% in the world.

The grapes were previously sold to neighbouring wineries, and the first vintage under the Coolshanagh label was the 2012 Chardonnay (now sold out), made at Okanagan Crush Pad (OCP). The 2013 Chardonnay was made at OCP under head winemaker Matt Dumayne. This small batch Chardonnay saw the grapes fermented as a whole cluster with 32% neutral French oak to impart elegant structure, with the balance fermented in concrete egg-shaped vessels and left on lees for 11 months. The finished wine offers a distinctive combination of bright, nimble acidity and solid weightiness. The vineyard is unmistakably present in this wine, with its stony complexity and bright fruit evoking the rocky sub soils of the site.

With only 262 cases the 2013 vintage is expected to move quickly. It’s projected that the 2014 vintage will produce 400 cases of Chardonnay and 60 cases of Pinot Noir, which will be the inaugural Pinot Noir vintage for Coolshanagh.