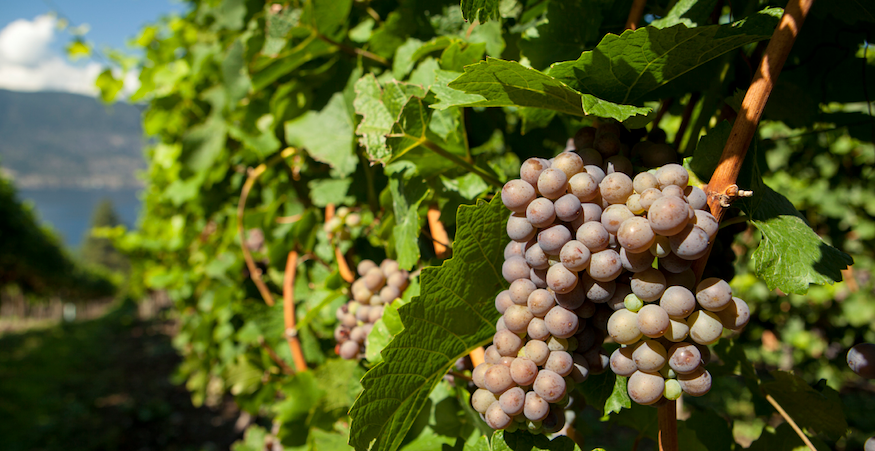 This year, 20 wineries expressed interest in producing Icewine for a potential harvest of 722 tons from approximately 169 acres, last year there was a total of 844 tons picked.

The first 2015 Icewine grapes were brought in by Volcanic Hills Estate Winery in West Kelowna on Wednesday, November 25 just after 6 AM with temperatures at -13°C (8.6°F), bringing in four tons of Chardonnay and four tons of Pinot Noir. At midnight last night they resumed picking, bringing in another five tons of Riesling. President Bobby Gidda reports that the overall quality is very good with very sweet characters, noting they got over 40 brix in their Chardonnay. “Being such a hot year, I thought a lot of the crop would’ve fallen off, but the large clusters of grapes were all hanging in there and I’m seeing nice sugars in the fruit. I think it’s going to be a very good vintage for Icewine,” says Gidda.

This is the third consecutive year BC’s Icewine harvest has started as early as November and many winemakers, including David Paterson at Tantalus Vineyards in Kelowna are thrilled. “It’s awesome when we get Icewine in November,” says Paterson, “This is my seventh Icewine harvest so I’ve done late picks in January and early picks in November and I love the purity of the fruit we get in an earlier pick. The early freeze condenses the vintage allowing us to capture the ripe flavours of pure juice with wonderful natural acidity in the wines.” Tantalus Vineyards had a team of 15 eager pickers ready to start Icewine harvest at 5 AM this morning with temperatures between -8°C (17.6°F) and -10°C (14°F) in their vineyard. Paterson notes that this was the largest group of volunteers they’ve ever had for Icewine harvest. By 7:30 AM they completed their picking bringing in approximately 2.5 tons of Riesling and Syrah grapes for Icewine.

Summerhill Pyramid Winery in Kelowna also started their harvest Wednesday night reporting “perfect conditions for picking” in a recent interview. Winemaker Eric Von Krosigk notes that they harvested 25 tonnes with another 96 tonnes to go, and the quality is outstanding.

Arrowleaf Cellars also harvested early this morning in Lake Country, starting at 5 AM at -10°C (14°F) and reaching a high of -9°C (15.8°F) by the time they finished picking at 8:30 AM. Vineyard Manager Joe Zuppiger notes that they brought in 3.5 tons of Vidal at 40 brix which will be pressed and completed today, with another five tons to pick tomorrow. If the temperatures are not cold enough to meet the standards for Icewine tomorrow, the rest of these grapes will be picked and used for their Late Harvest wine – a designation that allows wineries to pick grapes ideal for dessert-style wines without having to adhere to the standards of Icewine. “The grapes are of excellent quality right now,” says Zuppiger. “An added benefit from harvesting Icewine in November is the clean fruit we get with very little damage from birds and wildlife.”

As of this morning, six wineries have started their harvests and an estimated 71.50 tons have been brought in, leaving about 650 tons still to be picked with more harvesting expected to continue tonight. There have been no reported pickings from the South of the Valley yet, but with a cold front forecasted in the South, we expect volumes to increase over the weekend.So far we have had a diverse range of varieties picked for Icewine including: Vidal, Riesling, Merlot, Gewürztraminer, Pinot Blanc, Syrah, Chardonnay, and Pinot Noir.

With the arrival of the Icewine harvest, wine lovers across BC can look forward to an excellent crop of new Icewine releases in 2016.

Wineries that have decided to forgo the Icewine designation have already started picking grapes for Late Harvest wines on October 1,2015 with approximately 42.5 tons picked so far and still being picked.

The Wines of Marked Quality Regulation closely control the production of BC VQA Icewine. The key stipulations are that harvesting takes place at temperatures of -8˚C (17.6˚F) or lower, and the pressed grape juice is a minimum of 35 Brix.  Artificial refrigeration of grapes, juice, must or wine is strictly prohibited.

Harvest dates: Can be as early as November or as late as February. Producers track weather systems for early warnings of imminent cold weather.

Frequency: The Okanagan Valley and Similkameen Valley are the only areas to regularly experience these cold climatic conditions in British Columbia. When temperatures do not fall enough for Icewine harvests, producers often make Late Harvest wines.

The following are general production techniques.

Fermentation: Temperatures generally range from 15 to 20˚C over a three- to 12-week period, depending on the Brix and strain of yeast. Fermentation is generally stopped using cold temperatures resulting in alcohol levels between 9 and 12 percent.

Bottling: Generally within 6 to 9 months of the harvest.

Ageing potential: Icewines, particularly from Riesling, can age for over 10 years but are often preferred young and fresh.

ABOUT THE BC WINE INSTITUTE (BCWI)

The BCWI represents all wineries in British Columbia to grow the premium market share for the Wines of British Columbia, while driving awareness of our world-class wine tourism product – currently drawing 800,000 visitors with $476 million in tourism and tourism employment related economic impact every year.

The BCWI’s voluntary membership consists of 151 member wineries whose dues enable participation in various trade and consumer promotional events and retail marketing activities here in BC, across Canada and in select international markets, exclusively featuring BC VQA (100% BC) Wine. BCWI members produce 94% of BC VQA Wine sold in British Columbia.

Warm Up to Winter – The Platinum Experience winery tours

Winemaker’s Thoughts on BC Harvest 2020