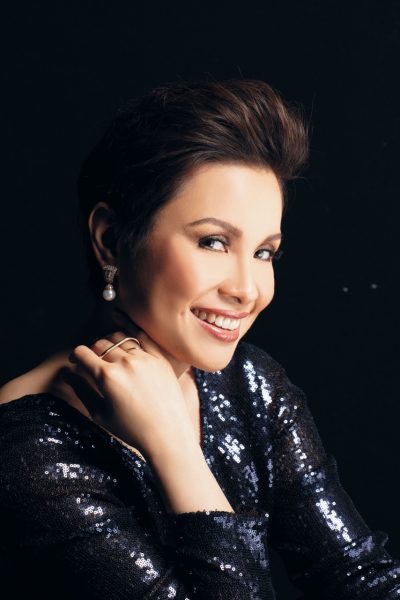 Tony Award winning actress and singer Lea Salonga is bringing her powerful voice and perfect pitch to the Queen Elizabeth Theatre for only one show, Monday, April 13th  at 8pm.   Now’s your chance to experience her formidable talent live and in-person as she returns to the stage embarking on a North American tour.

Lea is now best known for her Tony Award winning performance in the musical, Miss Saigon. In addition to the Tony, she has won the Olivier, Drama Desk, Outer Critics Circle and Theatre World Awards, in the field of musical theatre. She was also the first Asian to play Eponine in the musical Les Misérables on Broadway and returned to the beloved show as Fantine in the 2006 revival. Many fans of all ages recognize Lea as the singing voice of Princess Jasmine from Aladdin and Fa Mulan for Mulan and Mulan II.  For her portrayal of the beloved princesses. the Walt Disney Company bestowed her with the honor of “Disney Legend”.

She began her career as a child star in the Philippines, making her professional debut in 1978 at the age of seven in the musical The King and I. She went on to star in productions of Annie, Cat on a Hot Tin Roof, Fiddler on the Roof, The Rose Tattoo, The Sound of Music, The Goodbye Girl, Paper Moon, The Fantasticks and Rodgers and Hammerstein’s Flower Drum Song on Broadway.

“I’m thrilled to be back on the road in North America, and all around the world, in 2020”, stated Salonga.   “We’ve got a lot of new music, some old favorites, and a few surprises in store. We had so much fun with our incredible sold-out audiences last year, I can’t wait to perform at these gorgeous venues and connect with fans new and old in the months to come.”

Most recently, Lea received critical acclaim for her portrayal of Mrs. Lovett in Sweeney Todd with stints in Manila and Singapore. Her 2019 The Human Heart Tour saw record-breaking audiences around the world including North American, Australia and the UK. Currently, Lea serves as a judge on the Philippines hit version of “The Voice” including the ratings juggernaut “The Voice Kids”.

What Critics are Saying

“Lea Salonga’s emotional resonance and power and purity of voice left the audience breathless with wonder at many moments throughout the evening. This was quite simply one of the best concerts many members of the audience may ever attend.” – Tyler Hinton, BroadwayWorld

A “voice that sweeps across continents as it conjures the aspirations of the inner princesses in millions. One of the year’s finest shows.”   – Stephen Holden, NY Times

“Ms. Salonga is the vocal personification of what might be called the Broadway and Hollywood international style.”  – Stephen Holden, NY Times

“Salonga doesn’t disappoint her fans; she gives her all”   Brian Scott Lipton, TheaterMania

“Those who have seen it have all fallen in love with Lea’s magical voice and stage presence.” – Edmund Silvestre, The Filipino Reporter

“If you close your eyes when Lea Salonga sings, you’ll feel like you’re sitting in a room with a Disney princess.” – Julie Steinberg, Wall Street Journal.com

“Ms. Salonga is a performer whose formidable talent is matched by her unstoppable drive and keen intelligence. As Broadway divas go, she is a cut above most.”  Stephen Holden, NY Times

“Hers is probably one of the clearest and most expressive voices in cabaret and theater today” – David Sheward, Backstage.com

Multiple award-winning actress and singer Lea Salonga is renown across the world for her powerful voice and perfect pitch. She is best known for her Tony Award winning role in Miss Saigon. In addition to the Tony, she has won the Olivier, Drama Desk, Outer Critics Circle and Theatre World Awards, in the field of musical theatre. She was also the first Asian to play Eponine in the musical Les Misérables on Broadway and returned to the beloved show as Fantine in the 2006 revival. Many fans of all ages recognize Lea as the singing voice of Princess Jasmine from Aladdin and Fa Mulan for Mulan and Mulan II. For her portrayal of the beloved princesses, the Walt Disney Company bestowed her with the honor of “Disney Legend”.

Lea’s 2019 The Human Heart Tour saw sold-out audiences and record-breaking sales across North America and the United Kingdom. On Broadway, Lea most recently starred in the 2018 Broadway revival of Once on This Island as the Goddess of Love, Erzulie. The show’s return to the Broadway stage earned a Tony Award for “Best Revival of a Musical” and also garnered Lea and the cast a Grammy nomination for “Best Musical Theater Album.”

In late 2017, Lea released “Bahaghari,” an album of traditional Filipino songs. The album serves as a reflection of all the intricate and different languages found in the Philippines and aims to help preserve the island nation’s dynamic culture.

Lea also released her electrifying live album “Blurred Lines” in the spring of 2017. The album was recorded during her sold-out run at Feinstein’s / 54Below the year before. The original six-date showcase was received with overwhelming accolades from fans and critics alike. So well received in fact that Lea returned to the famed venue for a record-setting 15-show encore performance in the late spring (2017).

In the fall of 2015 Lea began her critically acclaimed run as Kei Kimura in the Broadway production of Allegiance. The musical, inspired and developed by legendary actor George Takei, tells the story of a Japanese American family forced into an internment camp during World War II. Lea garnered a Craig Noel nomination for Outstanding Featured Performance in a Musical for her performance in the Old Globe production and can be heard on the show’s original cast album. Following this, Lea made a guest appearance on the hit CW television show Crazy Ex-Girlfriend.

For much of 2014, Lea performed with legendary popera quartet Il Divo, accompanying them in Asia, the United States, Canada, Mexico, and all through Eastern and Western Europe on their A Musical Affair tour, celebrating the band’s 10th anniversary. She can be seen on their latest DVD and CD bearing the same name.

Lea made her debut in the world of Cabaret in 2010, performing a sold out, three-week engagement at the Café Carlyle in New York City. She returned in June 2011 to delight audiences in another multi-week engagement and released a live version of her 2010 concert “Lea Salonga: The Journey So Far,” her 26th career CD, in August 2011. The CD rose to the #3 spot on iTunes Jazz Charts. In 2013, she did a third engagement titled “Back to Before,” which was lauded by the New York Times.

Lea has toured all over the world, performing sold out concerts in such locations as the Sydney Opera House, 02 Arena, Disney Concert Hall in Los Angeles, Singapore’s Esplanade , Kuala Lumpur Convention Center, Hong Kong Cultural Center ), Queen Sirikit Convention Center in Bangkok and Carnegie Hall in New York. She was also the first artist to sell out two shows at Brigham Young University’s deJong Concert Hall in Provo, Utah since The Kings Singers in 2009.

In 2010, she participated in the 25th Anniversary Concert of Les Misérables to sold out crowds at the UK’s O2 arena having appeared as Eponine in the show’s 10th Anniversary concert. She also dazzled as the hauntingly tragic Grizabella in a limited run of CATS in her hometown of Manila. Lea also teamed up with legendary Grammy winner, Patti Austin, to perform the concert series, ‘Heart and Soul,’ at venues throughout the United States.

Honored with an appointment as a United Nations Food and Agriculture Organization Goodwill Ambassador in October of 2010, Lea vowed to act as an advocate for the Youth and United Nations Global Alliance initiative led by the FAO. The same year, she also joined forces with Avon as a celebrity judge for Avon Voices, alongside such artists as Fergie, Natasha Beddingfield and Diane Warren, in the first ever global, online singing talent search for women and song writing competition for men and women.

An avid techie and gamer, Lea divides her time between Manila, Philippines with her family and the United States.