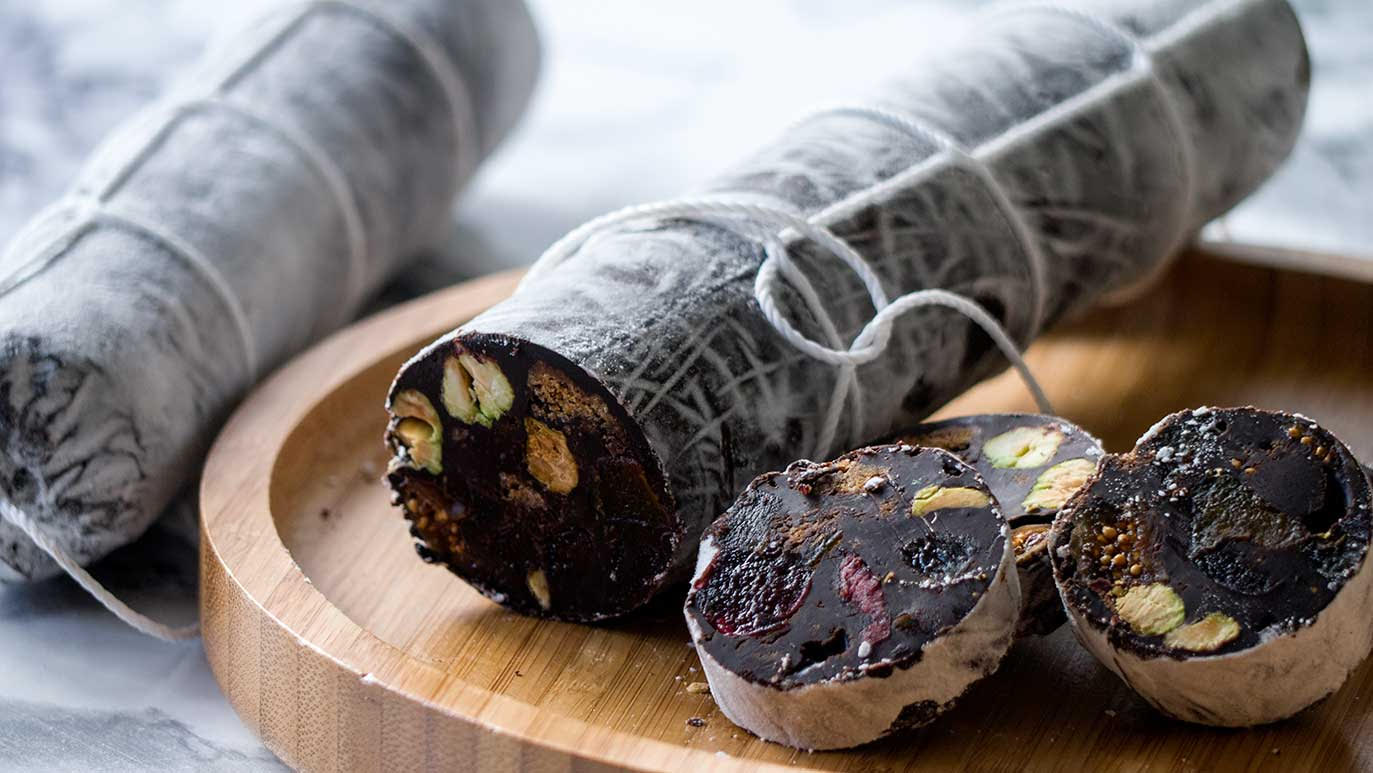 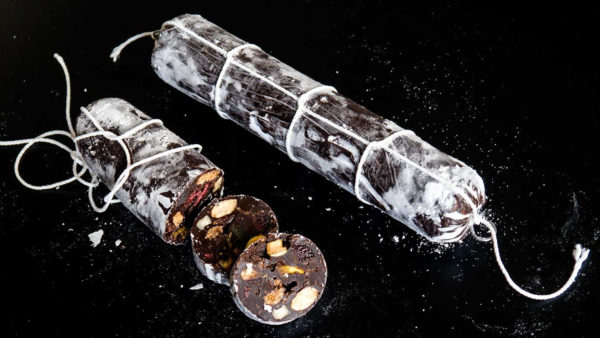 “This weird and perhaps not-so-attractive and yet festive novelty is a delight and you’d be crazy not to make some quickly !”

Of course, this isn’t my invention, this is an Italian and Portuguese holiday sweet, often called “chocolate salami” … I simply re-adapted my chocolate and biscuit blocks for the holiday season to include a mixture of nuts, dried fruits and candied fruit as well as holiday spices such as cinnamon, nutmeg, cloves and the ginger. The principle is simple, I replaced the 200 grams of biscuits with an equal mix of 50 grams each of biscuits and all those fruity, nutty and sweet extras. I also replaced the heavy cream and syrup with butter because lowering the amount of biscuits means that the extra creamy liquid will not be absorbed by them, so butter was a better and firmer alternative for this drier and more compact version. Anyways, for 200 grams of chocolate, you use an equal amount (200 grams) of any mix of nuts, candied fruit, dried fruit and biscuits you have handy and spices that remind you of the holiday season and of course, good quality dark chocolate. The rolling is much easier than you think, the icing sugar coating is easy too, the tying with butcher’s twine is a little more complicated but will make others say “WOW”. I suggest doubling the recipe to make 4 long or 8 shorter versions as individual holiday gifts ! Happy Holidays to all … 🙂

50 grams speculoos cookies or other dry, crispy biscuits like ginger snaps or digestives or tea biscuits (about ½ cup broken up in smaller pieces)

2 tbsp cognac or brandy or rhum

break up the cookies into smaller pieces and set aside

chop candied fruit into smaller pieces and set aside

grind and/or grate and/or crush the cloves, cinnamon, nutmeg and ginger and set aside

in a double-boiler or bain-marie, melt the chocolate with the butter (both cut into smaller pieces) until melted and smooth

add the ground spices, dried fruits, nuts, candied fruit and cookies to the melted chocolate and mix with a wooden spoon until everything is well-coated and let cool 10 minutes

grab one side of the cling wrap and start tightly rolling the mixture into a log shape, about 15-20 cm long X 4 cm wide, even it out and pinch and twist the ends tightly too

note: to retain the sausage shape, use empty paper towel cardboard tubes and slip them inside and place in the freezer for 1-2 hours minimum

when very firm, unwrap the chocolate sausages, coat with icing sugar, brush excess off and tie with string to resemble traditional sausages and store in the refrigerator, wrapped in parchment paper and in an airtight bag

note : the desert is quick to make, even the rolling … tying is tricky but I used 2 short metal mini-skewers on each end and then tied the string to one end and created the twine loops and tied the string to the second end to finish it off … 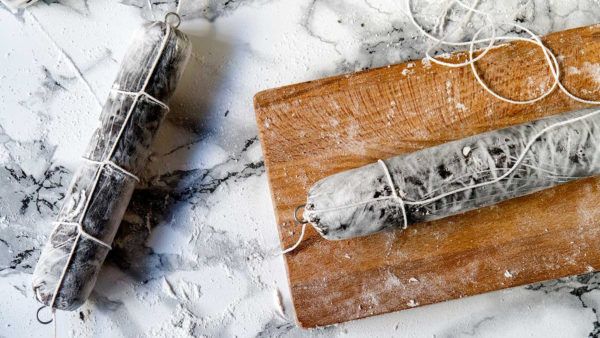 note : I suggest doubling the recipe to make more chocolate sausages (even shorter ones) and freezing them in the cling wrap until needed; the icing sugar coating and tying could be completed later, as needed. 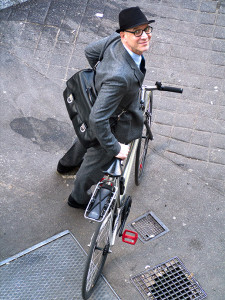 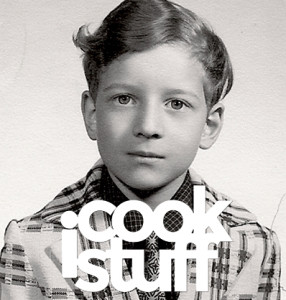