Wines of British Columbia hosted a Fall Release Tasting – COLOUR for trade, hospitality and media giving us an opportunity to taste BCVQA (Vintner’s Quality Alliance) wines. This designation tells the consumer/wine drinker they are enjoying a wine made solely from BC grapes.

A seminar on the Geographical Indications (GI) of British Columbia was presented by Master Wine authority Rhys Pender of wineplus.ca. Rhys has years of experience and an extensive background in the industry of BC wines. His seminars are equally interesting and informative. 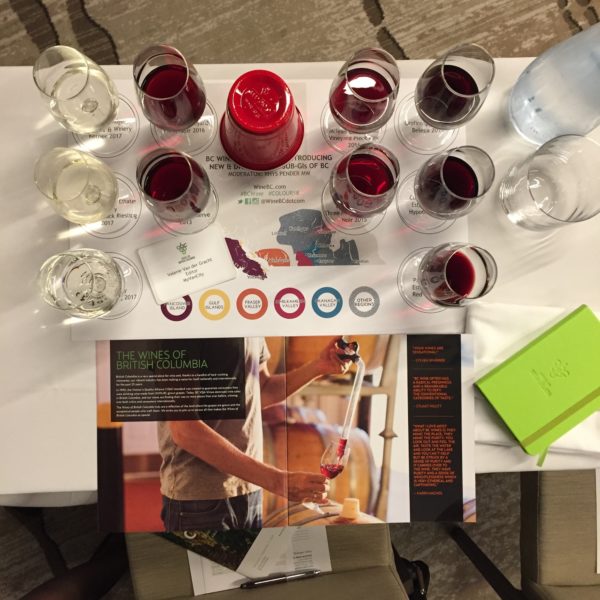 This also gave us an opportunity to try wines of each GI and Sub-GI. Some I hadn’t tasted before and other old favourites. Even wines of the same varietal were different in taste between GIs and Sub-GIs. There is always something new and different to learn about BC Wine and this was an excellent way to learn and enjoy.

New GIs and Sub-GIs have been established in BC thanks to the recommendations of the BC Wine Appellation Task Group. Thompson Valley, Shuswap, Lillooet and the Kootenays are now recognized GIs (Geographical Indications). These changes allow wineries that are located in these regions to label their wines with a distinct geographical location rather than just using “British Columbia”.

This is an exciting new change and distinguishes these GIs and Sub-GIs in a very critical way. If you think about other international wine regions such as France where the wines are known mostly by their GI, Champagne, Bordeaux, Burgundy, Chablis. You immediately know the varietal of the wine just by the region. No other wine can use this distinct designation.

As BC wines become more widely known on the international stage these GIs and Sub-GIs will play a bigger role in recognition and marketing. There will be some challenges as wineries adapt to these new regulations but overall all this is good news.

The wines we tasted:

Thanks to the British Columbia Wine Institute who have provided information on the new GIs and Sub-GIs to facilitate this article.

How Were the New GIs Created?

The new geographical indications were created using a combination of criteria specific to each region. The most important elements were a shared watershed area and/or elevation zones that encompassed both existing and potential growing areas.

The GI includes Kamloops, Cache Creek and Ashcroft, cutting off at Chase in the north-east portion of the region. A semi-arid region, the Thompson Valley has hot, dry summers and cold winters. The constant movement of the North and South Thompson Rivers creates air flow to help moderate temperatures providing many options for winemakers to shine with winter hardy hybrids and vinifera varietals like Riesling, Chardonnay and Pinot Noir.

The Shuswap is located north of the Okanagan Valley. It is a diverse area that includes several major river drainages that flow into Shuswap Lake, the dominant feature in the region. The GI boundary follows the Shuswap basin watershed and is designed to capture areas that have landscape and climatic conditions that have suitability for agriculture. The GI has an upper elevation limit of approximately 1,000 m, well above the elevation currently climatically suitable for agriculture, but included for potential future expansion.

Wines have been produced here since 1997, predominately from cool climate varieties such as Maréchal Foch, Ortega, Siegerrebe, Gewürztraminer, Kerner and Zweigelt, which is understandable as it is one of the most northerly grape growing regions in North America and the coolest of BC’s interior wine regions.

The Lillooet GI covers a 100 km stretch of the interior Fraser River valley from Pavilion in the north to Kanaka Bar in the south. The GI incorporates a mountainous landscape of deep canyons and valley floor terraces (benches) surrounded by steep valley walls. The GI has an upper elevation of approximately 1,000 m, however, due to the steepness of the valley walls, viticultural production is currently climatically suited to elevations below 500 m and most ideally to elevations below 400 m.

The climate is similar to the traditional grape growing regions in the Okanagan Valley with long, hot, dry summers. However, nights can be cooler, making average summer temperatures slightly lower than in the Okanagan, but at the same time preserving the fresh crisp acidity in the wines. Successful varieties include Riesling, Pinot Noir, Cabernet Franc, Chardonnay and Pinot Gris.

The Kootenays GI is a large mountainous area of more than 2 million hectares (4.9 million acres), however, only a small fraction of this is currently suited for viticultural production. The boundaries of the GI are primarily defined by watershed boundaries, specifically the Kootenay River watershed from the US border to Balfour and then along the Kootenay River to Castlegar, the Slocan watershed, the Columbia River drainage from Lower Arrow Lake and the Columbia River to the US border, the watershed of the Granby River and of the lower reaches of the Kettle River from the Okanagan Basin divide east of Osoyoos including the areas around Rock Creek and Grand Forks. There is departure from the strict hydrologic boundaries configuration in the northern portion of the GI where the area surrounding Nakusp has been included in the GI.

Much of the area within the GI is high elevation and climatically unsuited for agriculture. Viticulture occurs along valley floors in the region in the warmest portions of the GI, specifically the Creston Valley, the Grand Forks area and with potential in the Rock Creek area. The most planted grape varietal in the GI is Pinot Noir, followed by other vinifera varieties including Gewürztraminer, Pinot Gris, Chardonnay and Riesling.

Sub-GIs of the Okanagan Valley

The sub-GI is located on the east side of the Okanagan Valley giving long afternoon sunlight with cool mornings. Cool air from higher elevations flows into the region at night keeping night time temperatures low and therefore retaining acidity. Chardonnay, Pinot Noir and Pinot Gris account for roughly 75% of the planted acreage in the area.

Named BC’s first sub-GI in 2015, the Golden Mile Bench is located on the westside of the Okanagan Valley, south of the town of Oliver and almost directly opposite the vineyards of the Black Sage Bench. Its southerly latitude makes it a warm region but its location on the west side of the valley means it gets morning rather than afternoon sunshine, making it a cooler region than its eastern neighbour. The vineyards of the sub-GI are located on the bench 40 to100 metres above the valley floor, giving enough altitude to ensure good air drainage and avoiding the risk of spring and fall frosts. Elevation ranges from 325 to 510 metres.

A wide range of different grape varieties, both red and white, are successful depending on the vineyard location. Chardonnay, Gewürztraminer, Riesling, Merlot, Cabernet Sauvignon and Cabernet Franc are among the most successful varieties.

As a consumer it’s nice to know where the grapes are grown, under what climatic conditions and terroir. As we explore more about BC wine and the regions, GIs and Sub-GIs, we can identify the wines we enjoy. That’s not to say we confine our search for wines to one region but it helps us educate our palate as we learn more about the grape growing process and the wine making procedure that follows.

Think about planning your next trip geographically. Chose your favourite wine varietal and then use a GI that grows the grape varietal those wines are made from. Wines of British Columbia has a Trip Planning app and more information on their website to help you plan ahead for your visit to BC Wine Country.

Enjoy a relaxing vacation in a private winery setting.

More of our #FavouriteThings – Summer Sipping $20. or less from Meyer Family Vineyards