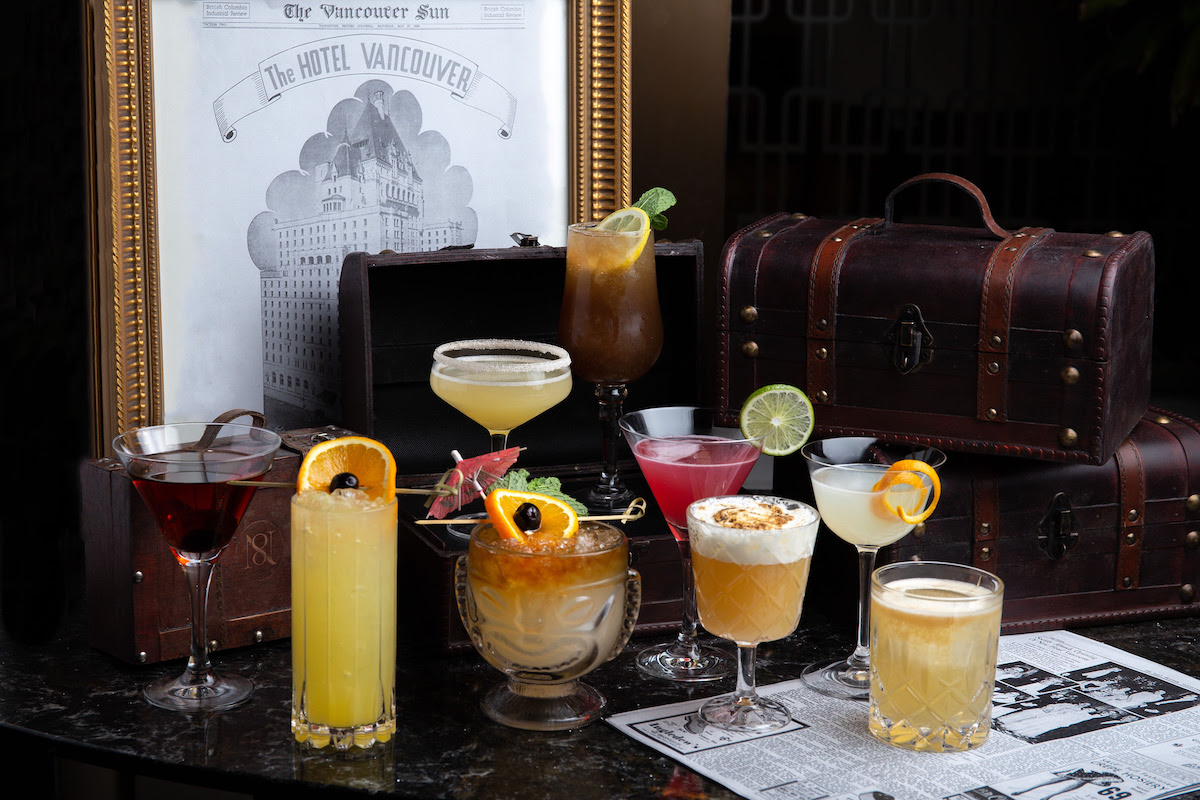 When the doors swung open to the third Hotel Vancouver in May of 1939, sculptor Charles Marega’s lions had just been installed at the south approach to Lions Gate Bridge, William Lamont Tate’s mansion on Matthew’s street sold for $7,500, the first transcontinental passenger air service from Vancouver to Montreal was inaugurated, and the cocktail du jour was the Bee’s Knee.

Times – and drinks, have changed and to pay homage to the millions of drinks that have been shaken and stirred under the hotel’s famed green roof over the past 80 years, the mixologists  at Notch8 Bar at Fairmont Hotel Vancouver have created a menu for tippling through the decades. The cocktails, available through September 1, are $16 with special prices of $8 during daily Happy Hour from 3:00 to 6:00pm.

TIPPLING THROUGH THE DECADES

1939- Bee’s Knees. A carry over from Prohibition, it’s thought that lemon was used to cover the taste and smell of bathtub gin, and like the cat’s pajamas and ant’s pants, the term was fashionable slang for “the best”.  Top notch and take it up a notch were also popular sayings and reflect the grandeur of rail travel when an engineer, after years of experience, could take the train to notch 8. The saying became the inspiration for the hotel’s dining room and lounge.

1949 – The Mai Tai.  In the 1940’s the Mai Tai became the rage after World War II.  Interest in the South Pacific exploded and colourful umbrellas became the standard garnish for a variety of drinks.  Created by Victor Bergeron in 1944 at his restaurant,  Trader Vic’s in California, the Mai Tai became so popular that it supposedly depleted world rum supplies.

1959 – The Harvey Wallbanger.  Who’s Harvey?  The drink was concocted by three-time world champion bartender Duke Anton and named after a surfer, Tom Harvey who was a regular in his bar in Los Angeles, the Blackwatch.  Harvey got so inebriated he ran into the walls and inspired the drink’s name. Made with vodka, orange juice and Galiano, it’s served in a Collins glass and garnished with a cherry and orange wheel.

1969 – The Manhattan.  The drink’s lineage is thought to have been created at the Manhattan Club in New York and has inspired countless cocktails.  A true classic, it’s made with rye, red Vermouth, and a dash of Angostura bitters, stirred with ice and strained into a chilled martini glass with a brandied cherry.

1979 – Long Island Iced Tea. Robert “Rosebud” Butt takes credit for concocting the drink in 1972 during a cocktail contest at the Oak Beach Inn in Hampton Bays, Long Island. It’s a misnomer with no tea in it at all but does have gin, vodka, Cointreau, rum and lemon juice.  Topped with Coke and garnished with a lemon wheel and sprig of mint, it gives the innocent appearance of tea and packs a punch.

1989 – The Cosmopolitan.  Carrie Bradshaw and her cohorts from the television series, Sex and The Citymade the “cosmo” an international phenomena for women around the world.  Pretty and pink, the refreshing drink has vodka, Cointreau, lime juice and cranberry juice that is shaken and strained into a chilled martini glass.

1999 – The Cable Car . A popular take on the classic Side Car, the cocktail was created by Tony Abou-Ganim a bartender at Starlight Room in San Francisco’s Drake Hotel where cable cars could be seen from the windows.  Made with spiced rum, Cointreau, lemon juice, simple syrup, it’s shaken and strained into a chilled coupe glass rimmed with cinnamon sugar.

2009 – The Penicillin. Considered a modern classic, the recipe was created by renowned bartender Sam Ross, an Australian working in New York City.  A smoky mix of blended Scotch, lemon juice, honey ginger syrup and single malt scotch, it’s shaken and strained into a rocks glass with a large ice cube.  And good for what ails you.

2019 – The Copper Griffin. The hotel’s signature cocktail is a cheeky reference to the green copper roof and gargoyles that front the hotel.  Mythical creatures that are part lion and part eagle, the griffin has become synonymous with the property.  The drink was inspired by the Royal connection (after all, the hotel was opened by King George VI and Queen Elizabeth on the first-ever tour of Canada by the country’s monarch) and their reputed love of gin of Dubonnet.  Made with Victoria Gin, Dubonnet, Lillet, lemon juice, and simple syrup, the copper coloured concoction is topped with lemon meringue foam and served in a stemmed glass.

About Fairmont
Fairmont Hotels & Resorts is where occasions are celebrated and history is made. Landmark hotels with unrivalled presence, authentic experiences and unforgettable moments have attracted visitors to Fairmont and its destinations since 1907. The Plaza in New York City, The Savoy in London, Fairmont San Francisco, Fairmont Banff Springs and Fairmont Peace Hotel in Shanghai are but a few of these iconic luxury hotels, forever linked to the special places where they reside. Famous for its engaging service, grand public spaces, locally inspired cuisine and celebrated bars and lounges, Fairmont promises a special brand of thoughtful luxury that will be remembered long after any visit. With a worldwide portfolio of more than 75 hotels, Fairmont also takes great pride in its deep community roots and leadership in sustainability. Fairmont is part of Accor, a world-leading travel and lifestyle group which invites travelers to feel welcome in almost 4,800 hotels, resorts and residences, along with some 10,000 of the finest private homes around the globe.
fairmont.com | accorhotels.group
Media release and image provided by Nancie Hall, Fairmont Hotels & Resorts, Pacific Northwest.