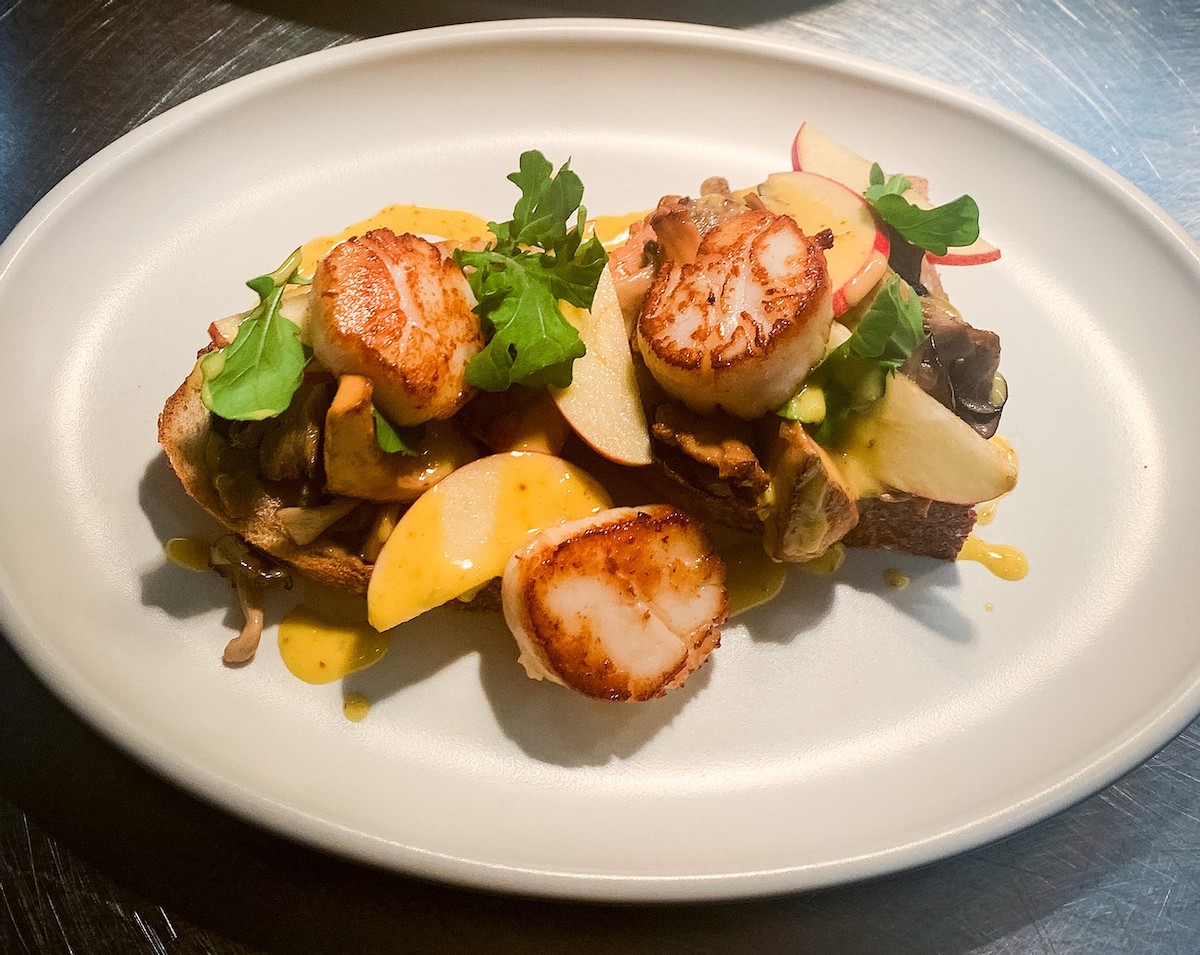 After a busy summer season, the Restaurant at Naramata Inn is moving into autumn with new menus, lunch available seven days a week, weekend brunch, and a special Thanksgiving offering.

“We’re inspired by the amazing ingredients that our producers bring to us,” says Chef Ned Bell. “The harvest season is a special time, and we’re excited to celebrate it with these new menus that make the most of what’s locally available. Apples from Creek & Gulley, pears from Garnet Valley, turkey from Rosebank Farms in Armstrong, squash and pumpkins from Medley Organic— we’re honoured to be able to bring them to our diners each day via our lunch and dinner menus, along with our new weekend brunch, and the most Naramatian Thanksgiving we can imagine.”

Lunch hours have also recently changed, and coincide with a brand new lunch menu now being offered seven days a week from 11:30 am to 1:30 pm. The new dinner menu will launch on Tuesday, October 13, with hours shifting earlier — from 4:30 pm to 8:00 pm — on November 1, in line with the shorter days.

With the summer over, and more visitors to the Naramata Bench looking to indulge on the weekend, the Restaurant at Naramata Inn is introducing a brunch menu offered on Saturday and Sunday. From 10:00 am through 1:30 pm, diners can kick off their weekend plans with items such as duck confit and mushroom frittata, a cultured buttermilk waffle with Naramata fruit, or eggs Benedict with wild BC side stripe shrimp.

Thanksgiving traditionally celebrated the local harvest, and there’s no better way that with the Restaurant’s special menu. Offered both as a three-course menu for $69 or a la carte, items include brown butter-roasted pumpkin soup with Naramata walnut crumble; Rosebank Farms turkey served with caramelized Brussels sprouts, Robuchon potatoes, milk bread pudding and roasted turkey gravy; and pumpkin pie with BC birch syrup ice cream. This menu will be the ONLY menu offered for dinner on October 10, 11 and 12.

Reservations for brunch, lunch, dinner and Thanksgiving can all be made via OpenTable or NaramataInn.com.

The Restaurant at Naramata Inn launched in late June, following the reopening of the Inn’s boutique accommodations earlier the same month. The 112-year-old Inn holds a special place in Naramata’s history, and new owners Ned Bell, Kate Colley, Paul Hollands and Maria Wiesner are honoured to contribute to its enchanting story and share it with guests.

Reservations for the Restaurant at Naramata Inn are available now.

Constructed 112 years ago by the town’s founder, J.M. Robinson, Naramata Inn would welcome some of the Okanagan’s very first tourists and go on to weave a colourful thread throughout Naramata’s history. Naramata Inn is still making headlines as the best way to enjoy the full bounty of the Okanagan Valley. The Inn delivers a proudly “Naramatian” experience, from the best local growers and artisans in Naramata and the Valley, through to showcasing the true depth and breadth of award-winning wines produced by British Columbia’s winemakers.

Ned is a well-known Canadian culinary talent who has forged a path as a chef advocate, keynote speaker and educator, and now owner and chef at Naramata Inn. As one of the country’s leading chefs, he has used his voice, outgoing personality, and indomitable spirit to stand up for the world’s lakes, oceans and rivers. Ned has earned many honours over the years, most recently: Fellow of The Royal Canadian Geographical Society (2019), Honorary Doctorate in Technology from Vancouver Island University (2019), SeaWeb Seafood Summit Global Champion Award (2017), and author of the best selling cookbook Lure: Sustainable Seafood Recipes from the West Coast.

Media release and image provided by Krista Lochhead, Colley Communications. Photo Credit John Hollands. If you would like to be featured on MyVanCity.ca please contact your pr agency of email myvancityval@nullgmail.com for full details.