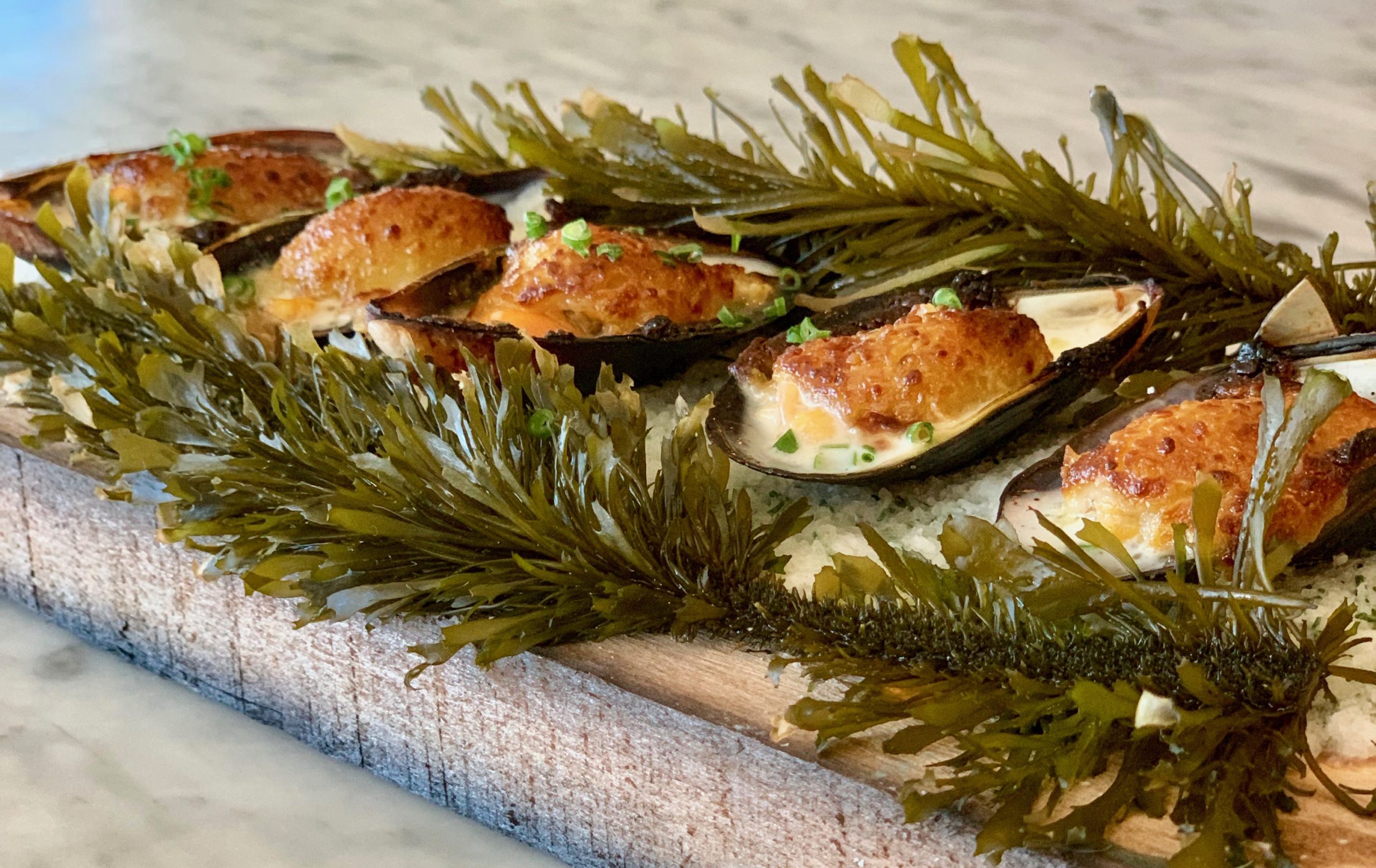 The much anticipated #TofinoEats Chef Series dinner featuring the culinary magic of both guest Chef Alex Chen and hosting Chef Paul Moran was truly nothing short of outstanding.

Earlier in the day I had the opportunity to sit in on the activity happening in the kitchen at 1909.   Both Chef Chen and Chef Moran gave minute detail of the dishes they had created and welcomed their team to sample each one. Every dish was plated, described and discussed with the servers who would be working during the evening. It gave an interesting perspective to what was to come. The effort, the skill, and the dedication to the art of fine dining was evident in the descriptions the chefs gave as one by one every dish was placed on a large table under the curious and watchful eye of the entire culinary team at 1909 Kitchen. The pride of the two chefs working together to create one exceptional dinner shone through the professional veneer as the excitement started to build.

Both Chef Chen and Chef Moran are committed to locally sourced, ultra fresh ingredients of discriminating quality and their dishes reflected this in their creation. With an emphasis on local seafood every dish was thoughtfully created. Every dish was excellent. The concept at 1909 Kitchen is sharing plates making it possible to enjoy a greater number of the outstanding dishes. Picking and choosing was no small task but we definitely indulged ourselves. Starting with… 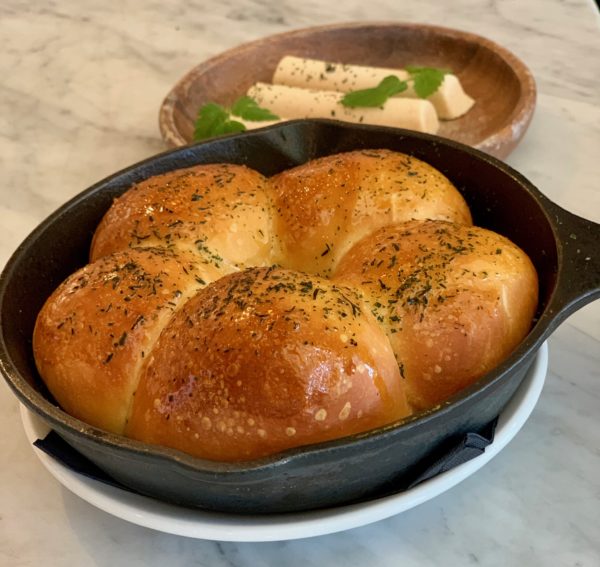 How can you possibly say no to Park House Rolls, and add in Side Stripe Shrimp Butter, we quickly made short work of this pan of rolls. I still can’t believe the serving was so generous. We did actually take some away because we wanted our appetite for the dishes yet to come. 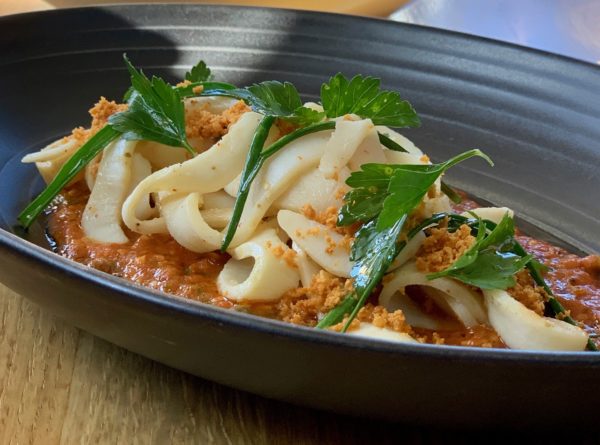 This dish was described as having  just the right bite with the Putanesca sauce. What a terrific combination, succulent squid perfectly finished with the burst of flavour from the rich sauce. 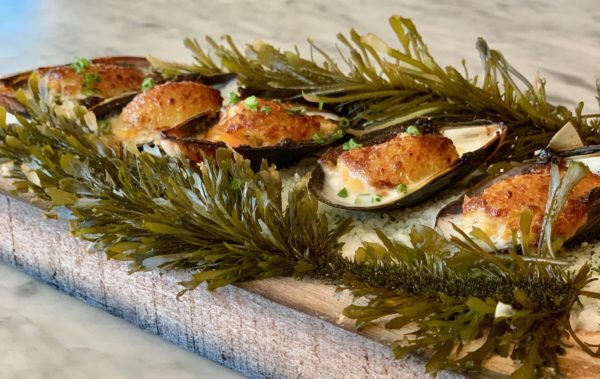 We could not get enough of the Miso Butter Crust Honey Mussels. Although we had been concerned about overeating that went right out the window when these beauties were brought to the table. 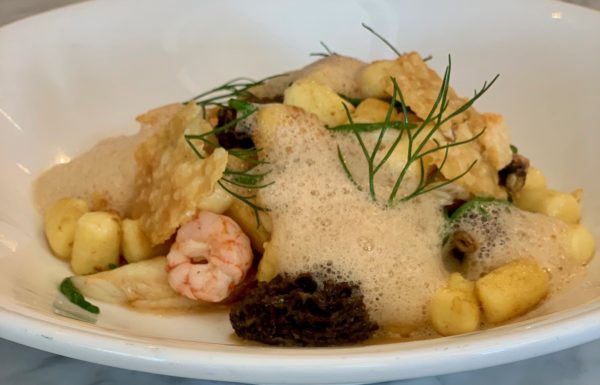 What can you say about a dish that ticks all the texture and taste boxes. Rich and delicious. This would make a main all on its own. You probably wouldn’t want to share it anyway. 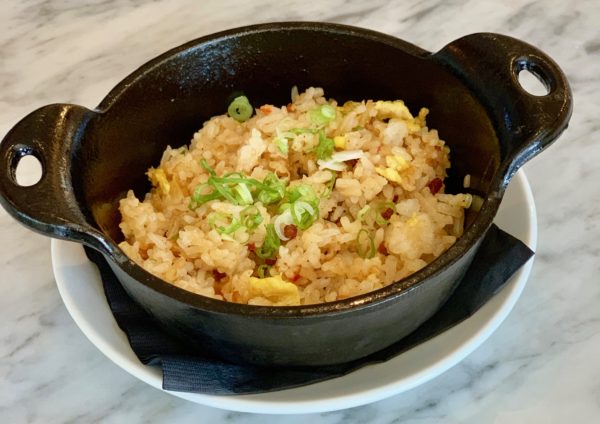 You can’t get much more West Coast than Sable Fish. The sauce added the ideal companion to the flavour of the wood roasted dish which paired very nicely with the fried rice. A dish that was deceivingly light, tender in texture, flavourful, and sharing between two was just right. 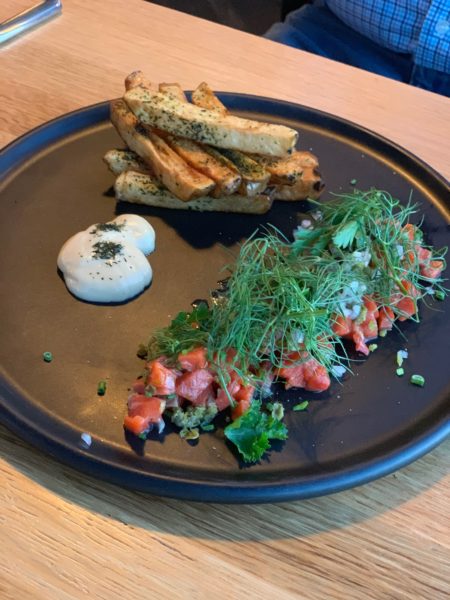 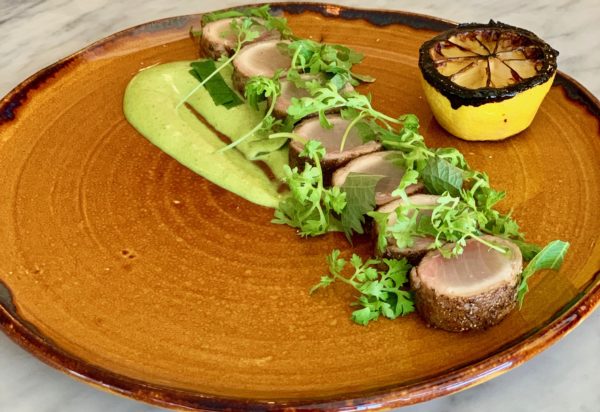 According to Chef Paul Moran this dish was inspired by his time at West Restaurant in Vancouver. You could almost say it was 15 years in the making, or at least 15 years arriving on the table at 1909 Kitchen. A superb take on Piedmont traditional vitello tonnato. Here’s hoping this one makes it to the 1909 Kitchen dinner menu permanently. 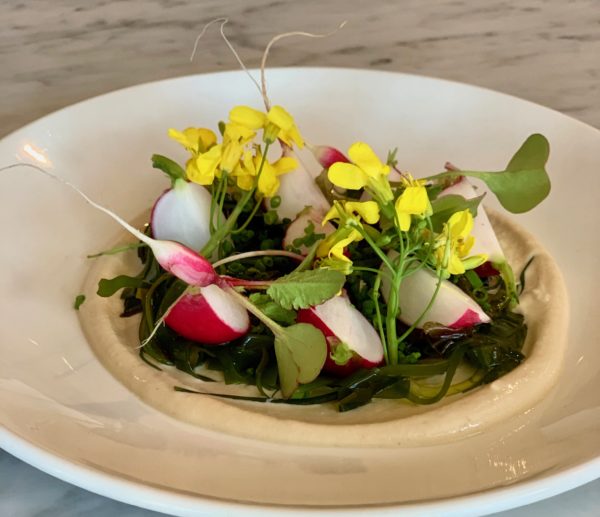 A tribute to not only healthy eating but to the surrounding sea and it’s bounty. 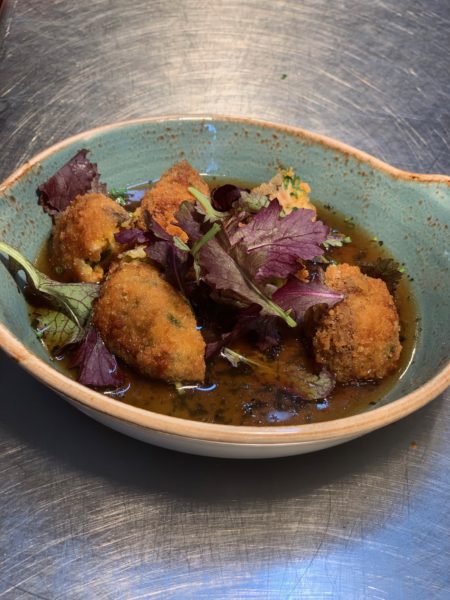 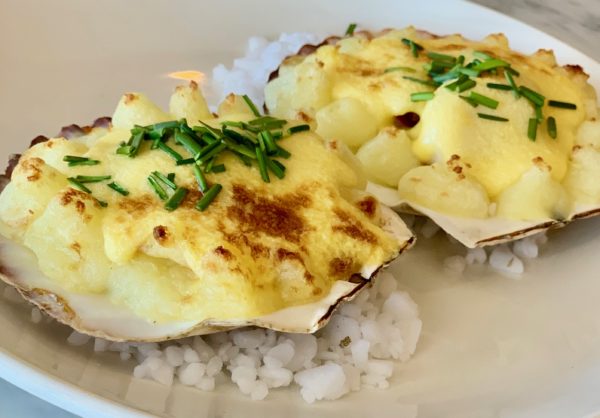 Lurking under the “to die for” Hollandaise topping were the most phenomenal scallops I think I have ever tasted. Melt in your mouth flavour and cooked just to perfection and no more. Surrounded by tiny little morsels of Yukon gold potatoes.  Our final dish was as fantastic as the first, and each, and every dish in between.

I literally cannot remember the last time I dined on dishes as outstanding as these served at the #TofinoEats Chef Series on April 27. Every dish we sampled was as good as the previous dish. It would be impossible to choose just one favourite. Each dish was thoughtfully prepared and beautifully presented.

ABOUT ALEX CHEN | Alex Chen got his first start of the restaurant industry in Vancouver while working as a dishwasher and busboy after emigrating with his family from Malaysia at the age of 13. From that auspicious start Chen went on to build an impressive resume with more than a decade of experience at some of the most acclaimed hotel properties across North America, including the world-renowned Beverly Hills Hotel and Polo Lounge and Four Seasons Hotels in Toronto and Chicago. A classically trained chef with a true taste for high-pressure culinary competitions, Chen led Team Canada to a top-10 finish at the 2013 Bocuse d’Or in Lyon, France prior to opening Boulevard Kitchen & Oyster Bar in 2014 and went on to claim top spot in both the 2015 and ’17 editions of the annual Gold Medal Plates regional championships in Victoria, BC, as well as the gold medal at the 2018 Canadian Culinary Championships in Kelowna, BC.

Boulevard Kitchen & Oyster Bar Executive Chef Alex Chen has been promoted to new key roles within the restaurant and beyond. Chen to Divide Time Between Boulevard and Larger Role in Sutton Place Hotels’ Luxury Brand. Alex Chen is one of Canada’s most respected chefs and an All-Clad Canada Ambassador.

ABOUT PAUL MORAN | Chef Moran started his impressive career as an apprentice with WEST Restaurant in his hometown of Vancouver under the leadership of renowned Chef David Hawksworth. He was the first-ever recipient of the Hawksworth Young Chef Scholarship, which awarded him the opportunity to stage at the legendary Pujol in Mexico City.

Chef Moran’s career includes prestigious restaurants in Dubai including the Jumeirah Beach Hotel and two Michelin-starred restaurants in France: Hotel Negresco and Saturne Restaurant. Drawn back to the west coast of Canada, Moran has held Executive Chef roles at West Coast Fishing Club’s Outpost Lodge in Haida Gwaii and the award-winning Nita Lake Lodge in Whistler. A fifth-generation forager, Moran became the Executive Chef at 1909 Kitchen at Tofino Resort + Marina in 2017 and as he is passionate about a locally sourced, ingredient driven menu, he finds the oceanside community a perfect fit.

1909 Kitchen’s Chef Paul Moran competes in Canada’s most prestigious culinary competition against the best and brightest professional chefs across Canada on Top Chef Canada, premiering April 1, at 7 p.m. PT / 10 p.m. ET on Food Network Canada. Chef Moran finds himself up against ten other professional chefs in the seventh season of the intense cooking show – competing for the coveted title of Canada’s Top Chef and the grand prize of $100,000.

About 1909 Kitchen:
Signature waterfront restaurant, 1909 Kitchen, offers a shared plate concept with Chef Paul Moran at the helm, showcasing produce sourced and foraged from Tofino’s ocean, shoreline and forests. Chef Moran’s passion and talent for foraging, paired with his extensive culinary background, creates a distinctly Tofitian menu that represents the true essence of the rugged and bountiful west coast: seafood platters and freshly landed catch share the table alongside delicious vegetable-forward dishes and items from the kitchen’s Mugnaini wood-fired oven.
About Tofino Resort + Marina:
Adventure seekers coming to battle the waves, foodies drawn to the unique tastes of Tofino’s incredible culinary scene and ocean lovers looking for a hip home base – Tofino Resort + Marina is the perfect place to experience the spirit of the wild, west coast. Inspired by adventure, Tofino Resort + Marina is the only full-service resort situated on the inlet, and is just a short stroll from Tofino’s artisan boutiques, surf shops and Pacific flavours of this ruggedly refined ocean-side community.
All images by MyVanCity. I received dinner for myself and a guest complimentary to facilitate this review. All opinions are my own. A gratuity equal to 18-20% of the value of the dinner left with thanks to the team at  1909 Kitchen. * These items are available on the 1909 Kitchen dinner menu.
[wdi_feed id=”2″]