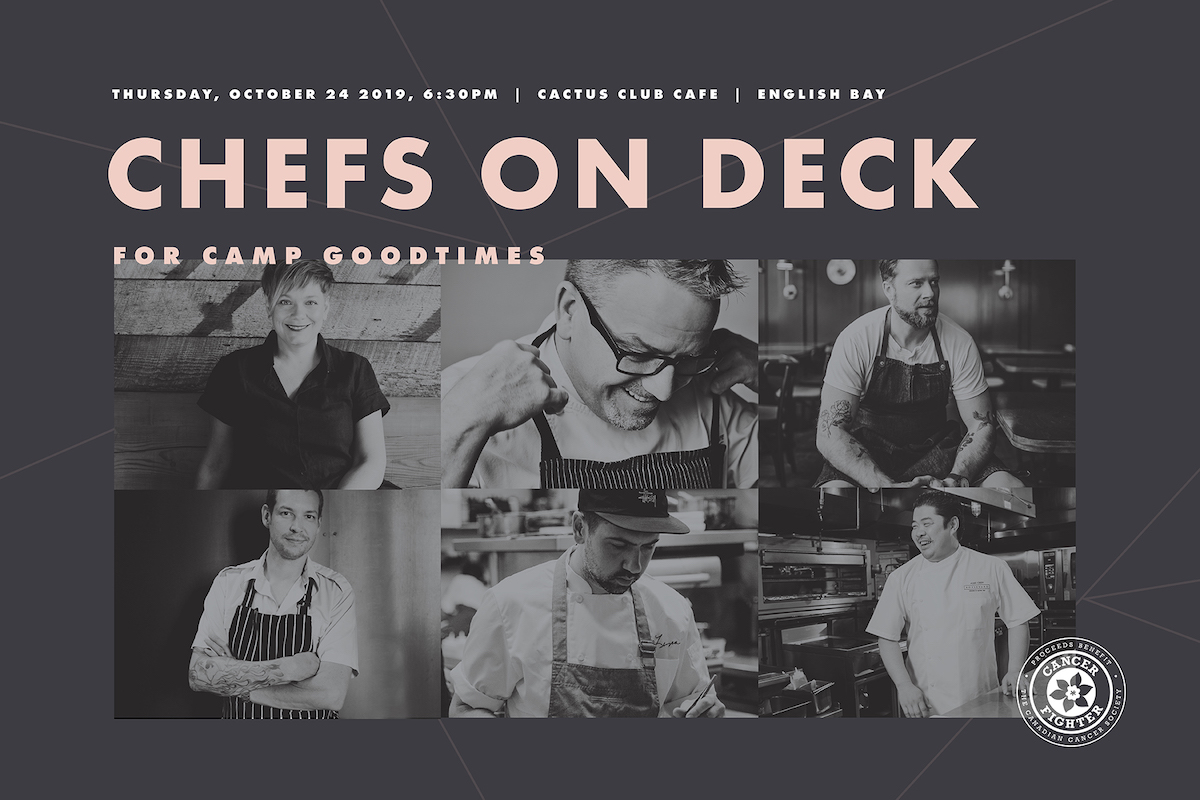 On October 24, Cactus Club Cafe Chef Rob Feenie will be teaming up with the city’s most renowned chefs to present Chefs on Deck for Camp Goodtimes. The charity dinner will be hosted at Cactus Club Cafe’s iconic English Bay location with all ticket sales proceeds benefitting Canadian Cancer Society’s Camp Goodtimes.

This sit-down dinner will feature a multi-course tasting menu from Vancouver’s most notable chefs with wine-pairings from two of Vancouver’s decorated sommeliers. Presented by Iron Chef Rob Feenie, Chefs on Deck is a collaboration with local culinary talents, including Alex Chen of Boulevard, Andrea Carlson of Burdock & Co., JC Poirier of St. Lawrence, Lee Cooper of L’Abattoir and Coquille Fine Seafood, and Mike Robbins of Annalena. They are joined by sommeliers, Sebastian LeGoff of Cactus Club Cafe and Shiva Reddy of Savio Volpe.

“Chefs on Deck is a special night for us,” says Chef Rob Feenie. “Not only is it a creative collaboration by some of the most talented chefs in the city, but it’s for a cause that we all believe in and rally behind.”

Camp Goodtimes offers year-round recreational programs for children whose lives have been changed forever by cancer. The camps provide an unforgettable and empowering camping experience for nearly 600 children, teens and family members each year.

“We’re very grateful to be the beneficiary of this wonderful evening,” says Camp Goodtimes Manager, Danielle McVicar. “It is through the generosity of our donors that we are able to make the magic of Camp Goodtimes a reality.”

Chefs on Deck started in Toronto in 2019 raising $90,000 dollars for various charities including Camp Oochigeas.

What: Chefs on Deck for Camp Goodtimes

Tickets: Available at Eventbrite for $215 per ticket + 18% gratuity